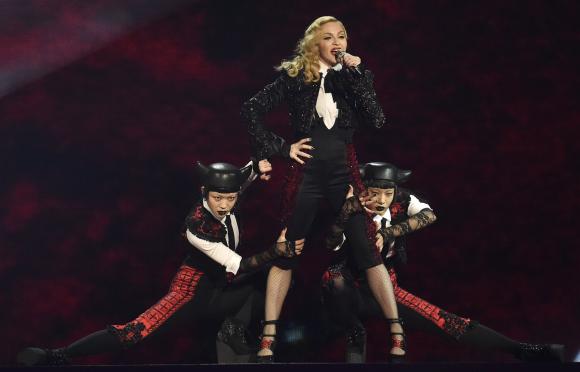 NEW YORK - Madonna added her voice to the controversy surrounding fashion designers Domenico Dolce and Stefano Gabbana, telling them to "think before you speak" after Dolce described children born to gay couples through fertility treatment as "synthetic." The performer joined other celebrities who criticized the Italian duo when she posted a message on Instagram along with a photograph of herself and a baby from Dolce & Gabbana's 2010/2011 winter collection campaign. "All babies contain a soul however they come to this earth and their families. There is nothing synthetic about a soul!! So how can we dismiss IVF and surrogacy?" said Madonna, who released her 13th studio album, "Rebel Heart," earlier this month. Pop star Elton John, who with his partner and husband David Furnish is the father of two children conceived through fertility treatment, slammed the designers for the comments and called for a boycott of the fashion brand. Celebrities ranging from designer Victoria Beckham to singer Ricky Martin rallied behind John after the Italian magazine Panorama published Sicilian-born Dolce's comments. "You are born and you have a father and a mother. Or at least it should be like this, that's why I am not convinced by chemical children, synthetic babies, wombs for rent," Dolce said. Madonna, a mother of four and a client of the designers, said God is involved in everything, including technology. "We are arrogant to think Man does anything on his own. As above so below! Think before you speak," she added on Instagram. In a statement released by the designers, who once had a romantic relationship and remain business partners, they said it was never their intention of judge other people's choices.