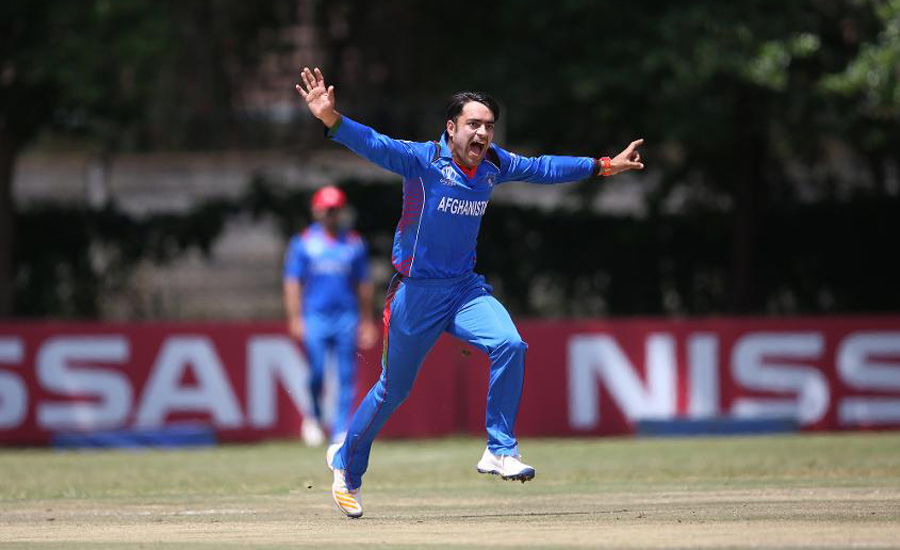 DEHRADUN, India – Rashid Khan added yet another extraordinary feat to a list that already outdoes most, defending eight runs off the last over of Bangladesh’s chase of 146 to seal the final game of the T20I series and complete a 3-0 whitewash. It was the thrilling finish a pulsating game deserved, one that swung to and fro with neither team ever fully on top. Not even when the final ball was struck was the result decided, Afghanistan only triumphing thanks to a superb boundary effort from Shafiqullah, who swatted the ball back into play to turn four into two, and a narrow defeat into a narrow win. Rashid’s last over, a mix of wrong’uns and leg-breaks that had the batsmen completely confused, was all the more miraculous since coming into the over it was Bangladesh who were in the ascendancy, a quintet of boundaries from Mushfiqur Rahim in the 19th having given the Tigers the intiative and reduced their target to single figures. It was the wicket-keeper who was on strike for the final over, and Rashid who struck straight away as the batsman holed out to deep square leg, ending an 82-run partnership that had rescued Bangladesh from the depths of 53/4. Mushfiqur and Mahmudullah had mixed aggression and care expertly until that moment, and seemed to have found a way to negotiate Rashid, who entered the last over wicketless. Such is his presence, the early run-outs of Liton Das and Soumya Sarkar, both in the last over of the PowerPlay and both a result of the non-striker setting off after the ball was hit straight to short fine leg, still felt partly attributable to him, with Bangladesh hoping to cash in before he inevitably tied them down. Tamim Iqbal too fell loosely, attacking perhaps unnecessarily in the face of a modest target. He hit Mujeeb Ur Rahman down extra cover’s throat as the rest of Afghanistan’s bowling attack stepped up, with the exception of medium pacer Karim Janat, who bowled the 19th over which had seemed pivotal and conceded 44 from his quota. Earlier, Afghanistan had made their way to 145/6 after a solid if uninspiring batting display. Opening pair Mohammad Shahzad and Usman Ghani set the tone, the latter particularly struggling but hanging in there in a first-wicket stand of 55 which consumed 7.4 overs, ended as Shahzad missed a reverse sweep and was struck on the pad. Soon after, Ghani’s tortuous stay was ended as he gloved through to the keeper, at which point captain Asghar Stanikzai helped arrest momentum. He struck three sixes in a 17-ball stay before being caught at long-on attempting a fourth. The dangerous Mohammad Nabi came and went, chipping Abu Jayed to mid off, as Afghanistan struggled in the slog overs, Najibullah Zadran scoring at less than a run a ball and Samiullah Shenwari not faring much better. Still, the latter’s unbeaten 33 lifted Afghanistan to some sort of total. It seemed middling, but, thanks to Rashid Khan, it would prove just enough. SCOREBOARD