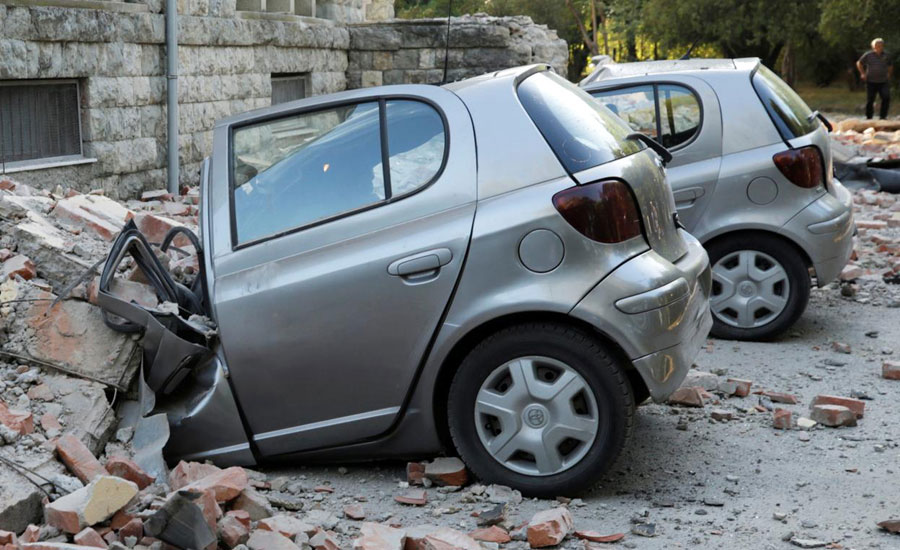 TIRANA (Reuters) - An earthquake with a preliminary magnitude of 5.6 and an aftershock only slightly weaker shook the Albanian port town of Durres , rocking buildings there and in the capital Tirana and sending residents rushing into the streets and parks for safety.

The Defence Ministry said it was the most powerful quake in Albania in the last 30 years.

“All our neighbors came out screaming. Thank God it did not last long - about 20 seconds. It was a nightmare on the 10th floor. I don’t remember a more powerful one than this,” a pensioner in Tirana called Agim, 67, told Reuters.

Health Minister Ogerta Manastirliu said 68 people had been treated for injuries in Tirana and Durres. Most were hurt while dashing out of their homes in panic.

Many of them have been discharged after treatment, she said.

“Fewer people are coming to the hospitals (after the first rush),” Manastirliu told reporters.

“Most importantly, there is no loss of life,” she added.

Twenty buildings were damaged in other areas.

“It was confirmed a while earlier that there is no damage to oil wells,” Xhacka said, referring to the oil-producing region of Fier.

The US Geological Survey gave the quake an initial magnitude of 5.6, while the Albanian Geosciences Institute reported it as registering 5.8 with an aftershock 11 minutes later measuring 5.3.

“Considering the (strength of the) first most powerful tremor, the main seismic event, it is good news the aftershocks have been less powerful both in magnitude and intensity,” Xhacka said.

One apartment building in Durres was heavily damaged, with a crack running down it from the sixth floor all the way to the ground. Footage showed cracks to houses and customers rushing out of cafes when the tremors began.

An old building in Tirana was evacuated after cracks appeared in its walls, while debris from fallen eaves of the roof could be seen scattered across the courtyard at the Geology Faculty of Tirana’s University.