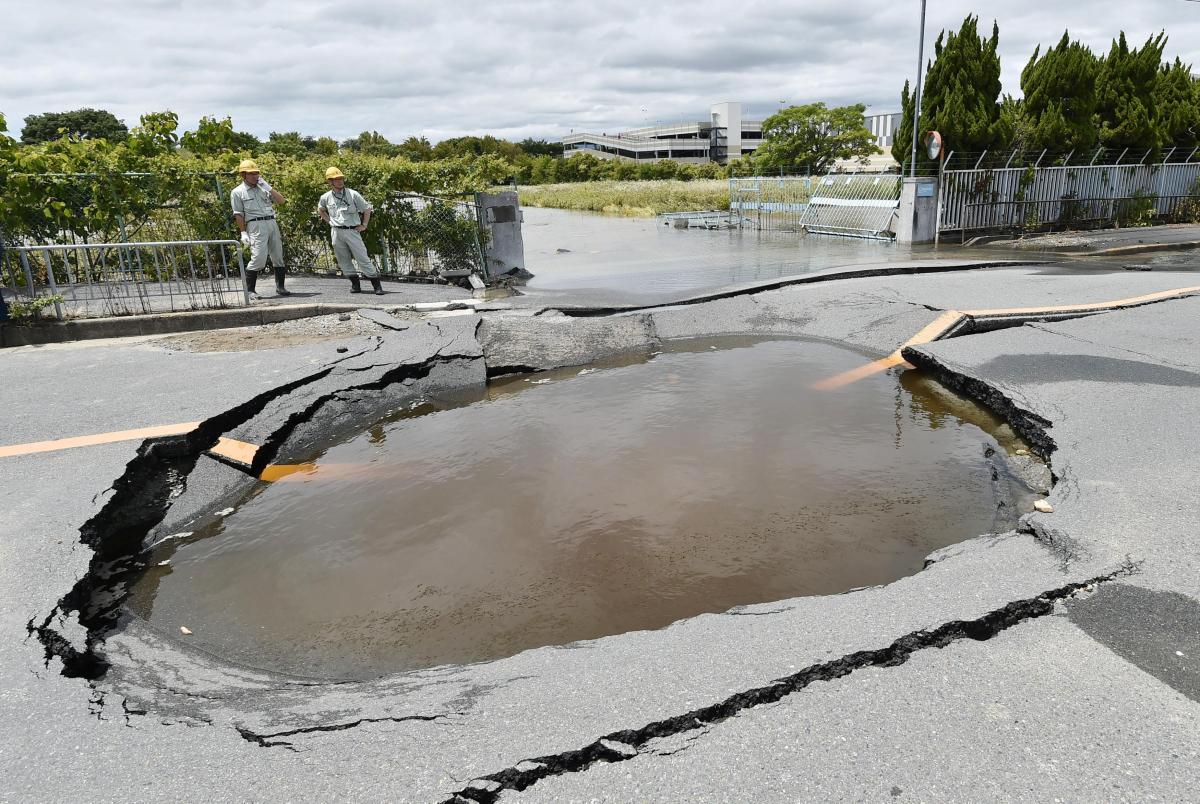 TOKYO (Reuters) - A magnitude 6.1 earthquake shook Osaka, Japan’s second-biggest metropolis, early on Monday, killing three people, halting factory lines in an industrial area and bursting water mains, government and company officials said.
No tsunami warning was issued. Prime Minister Shinzo Abe said authorities were assessing damage and their top priority was the safety of residents. About 150 people were injured, the broadcaster NHK said, lowering an earlier toll after a revision by city officials. Live footage showed toppled walls, broken windows and gushing burst water mains after the quake hit Osaka, which will host next year’s Group of 20 summit, just before 8 a.m. (2300 GMT Sunday) as commuters were heading to work. Quakes are common in Japan, part of the seismically active “Ring of Fire” that stretches from the South Pacific through Indonesia and Japan, across to Alaska and down the west coast of North, Central and South America. The epicenter of Monday’s earthquake was just north of Osaka city at a depth of 13 km (8 miles), said the Japan Meteorological Agency. The agency originally put the magnitude at 5.9 but later raised it to 6.1. The quake struck an important industrial area of central Japan. Osaka-based Panasonic said it was halting production at three of its plants. Daihatsu Motor Co, a unit of Toyota Motor Corp, stopped its factories in Osaka and Kyoto while it checked for damage. It said it would resume operations at the Osaka plant on Monday evening. Tractor maker Kubota Corp. said it halted two plants in the area, while air conditioner maker Daikin Industries Ltd suspended operations at two plants, one of which had restarted by noon. Honda Motor Co. and Mitsubishi Motors said they were resuming operations after suspensions and safety checks. Sharp Corp also resumed work at a joint venture plant with parent Hon Hai Precision Industry that it had stopped for safety checks. Three people were killed, authorities said. Collapsing walls killed a 9-year-old girl as she walked to school and a man in his 80s, Japanese media said. Another man in his 80s was killed when a bookcase fell on him.

“We were sleeping and it woke us up abruptly,” said Kate Kilpatrick, 19, an American who was staying in a hotel in Osaka when the quake hit. “It was so terrifying because this is my first earthquake. I thought it was a nightmare because I was so confused,” she said. “The whole world was aggressively shaking.” Kilpatrick, visiting Japan for the first time, said alarms went off almost immediately in the hotel and a loudspeaker told guests to stay away from windows. No irregularities were detected at the Mihama, Takahama and Ohi nuclear plants to the north of Osaka, Kansai Electric Power said. More than 170,000 households in Osaka and neighboring Hyogo prefecture lost power temporarily but it was restored within two hours, the utility said. Most trains in the Osaka area were still not running by late afternoon, police said. Osaka prefecture, which includes the city and surrounding areas, has a population of 8.8 million. The city is close to Kobe, which was hit by a deadly magnitude 6.9 quake in 1995. A massive 9.0 quake hit much further to the north in March 2011, triggering a huge tsunami that killed some 18,000 people and triggered the world’s worst nuclear disaster in a quarter of a century at Tokyo Electric Power’s Fukushima Daiichi nuclear plant. Japan introduced a law after the Kobe quake requiring owners of large buildings such as hotels and hospitals to have their buildings inspected for earthquake resistance.