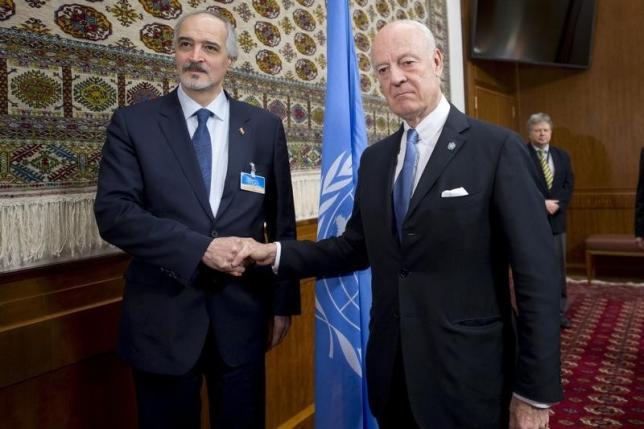 AMMAN – A delegation from Syria's main opposition group flew to Geneva on Saturday to assess whether to join Damascus government officials in United Nations-brokered peace talks, an opposition representative said.

The 17-strong team included the head of the Saudi-backed Higher Negotiation Committee (HNC), which includes political and militant opponents of Syrian President Bashar al-Assad in the country's five-year civil war.

The HNC has said it wants to discuss humanitarian issues including a stop to Russian and Syrian government bombing before engaging in the peace talks that started on Friday in Geneva.

"We want to show the world our seriousness in moving towards negotiations to find a political solution," he told Reuters.

French Foreign Minister Laurent Fabius said on Saturday the Geneva talks must ensure human rights are upheld as participants work towards a political transition in Syria.

"Humanitarian law must be respected and the objective of a political transition actively pursued to enable the talks to succeed," Fabius said in a statement sent to Reuters.

The HNC's demands include allowing aid convoys into rebel-held besieged areas where tens of thousands are living in dire conditions, Agha said.

The medical charity Medecins Sans Frontieres (MSF) said on Saturday that 16 people have starved to death in the government-besieged town of Madaya since aid convoys arrived this month and blamed the authorities for blocking medical supplies shipments.

Agha said the opposition delegation, including HNC head Riad Hijab and chief negotiator Asaad al-Zoubi, would not call for a complete cessation of hostilities but would demand an end to "the indiscriminate shelling of markets, hospitals and schools by the regime and its Russian backers".

In separate comments before heading to Geneva, Zoubi said they would not engage in any negotiations before these goodwill measures were taken.