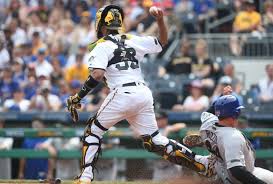 CHICAGO (Reuters) – Major League Baseball disagreed with game umpires and replay monitors regarding a controversial call in which Chicago Cubs first baseman Anthony Rizzo took out Pittsburgh Pirates catcher Elias Diaz with a slide at the plate. The play should have been ruled as interference on Rizzo, MLB told both teams on Tuesday, multiple media outlets reported. An interference call would have taken two runs off the board in a game the Cubs ultimately won 7-0. The Pirates viewed Rizzo’s eighth-inning slide, out of the basepath toward the pitcher’s mound and angled at Elias’ legs, as a dirty play. Pittsburgh manager Clint Hurdle deemed it “open season” on catchers after the play went unpunished. Following MLB’s Tuesday ruling, Hurdle said, “What’s most important, from my perspective, is that we let the industry know this particular slide was illegal, for the sake of the catchers. That was my argument yesterday, and I’m glad we came to some conclusion and some closure.” —The New York Mets placed All-Star right-hander Noah Syndergaard on the 10-day disabled list with a strained right index finger. The move is retroactive to Saturday. Syndergaard, 25, last pitched Friday, allowing three runs on six hits over six innings in a no-decision against the Milwaukee Brewers. He was scheduled to start Wednesday against the Atlanta Braves — left-hander Jason Vargas will take the mound in his stead. Syndergaard is 4-1 with a 3.06 ERA and 76 strikeouts in 64 2/3 innings of work this year. —Cleveland Indians left-hander Andrew Miller visited a specialist in New York to have his injured right knee examined. Indians president of baseball operations Chris Antonetti told reporters that there isn’t any indication — at least now — that the star reliever may need surgery. Miller was placed on the 10-day disabled list on Saturday, one day after allowing three runs in two-thirds of an inning against the Houston Astros. He is 1-3 with a 4.40 ERA in 17 appearances this season. —The Boston Red Sox announced the signing of first baseman Adam Lind to a minor league contract. Lind, 34, was released by the New York Yankees last week. He hit .241 with two home runs and seven RBIs in 16 games with Triple-A Scranton/Wilkes-Barre. He has hit .272 with 200 home runs and 723 RBIs in his 12-year major league career, last playing in the majors with the Nationals last season. With the signing of Lind, the Red Sox give themselves insurance at the first base/designated hitter position. The Red Sox designated Hanley Ramirez for assignment on Friday. —San Diego radio broadcaster Ted Leitner, who has called games for the Padres since 1980, revealed in a tweet that he was diagnosed with cancer. Leitner, 71, will have a tumor in his kidney removed Thursday. He said Wednesday will be the last game he calls before stepping away indefinitely, though he told reporters he hopes to return within a month. “From everything I’ve been told, the outlook is positive,” Leitner said, via MLB.com. “My other kidney is apparently healthy. My attitude is let’s get this done and return to what I love doing as soon as possible.” —Los Angeles Angels right-hander Matt Shoemaker, 31, underwent forearm surgery while fellow righty Blake Wood, 32, will undergo Tommy John surgery on Wednesday, the team announced. Shoemaker’s operation was for nerve decompression and pronator teres repair. An MRI last week revealed fluid buildup in his right forearm, and he also underwent a bone scan. He has pitched just one time this season, lasting 5 2/3 innings in a win against the Oakland Athletics on March 31. Wood had an MRI last week that revealed damage to the ulnar collateral ligament in his throwing elbow. He had a 2.31 ERA in 13 appearances with the Angels this season. He has a 4.47 career ERA in seven major league seasons. —The Houston Astros placed catcher Brian McCann on the 10-day disabled list with right knee soreness and purchased the contract of catcher Tim Federowicz from Triple-A Fresno. McCann, 34, has just one hit in his past 28 at-bats. He is hitting .219 with four home runs and 14 RBIs in 114 at-bats this season. Federowicz, 30, has six years of major league experience, with a career batting average of .196. —Right-hander Phil Hughes officially joined the Padres after being acquired from the Minnesota Twins on Sunday in a deal for catcher Janigson Villalobos. Left-hander Tyler Webb was optioned to Triple-A El Paso and fellow southpaw Kyle McGrath was designated for assignment in corresponding moves. Hughes, 31, had a 6.75 ERA in seven games (two starts) for Minnesota after beginning the year on the 10-day disabled list with an oblique strain.