LONDON (Reuters) - A power cut lasting up to an hour hit parts of Britain including areas of London on Friday evening, snarling rail services, knocking out traffic lights and disrupting an airport during the rush hour. Passengers were shut out of some of the country’s busiest train stations because of overcrowding and hundreds of thousands of people were left without power. National Grid, which owns the electricity transmission system in England and Wales, said there had been “issues” with two power generators and the problems had now been resolved. However the disruption caused was expected to last for the rest of the day because the outage occurred during one of the busiest periods of the week, with many people heading home for the weekend. “Being evacuated off a train after 2 hours stranded in the dark in a tunnel. Like a bad movie,” said Anna Stansfeld, a trainee medic, on Twitter. Britain’s transport police, which described the power cut as unprecedented, said officers were asked to help as rail services were suspended and customers on some train lines were being advised not to travel. London’s Euston and Kings Cross stations, which are two of the busiest stations in the city and serve the north of England as well as some suburban lines, were closed because of overcrowding caused by the cancellations and delays. Members of the public posted images on social media, which showed the tube network in the darkness and people having to use their mobile phones as torches. 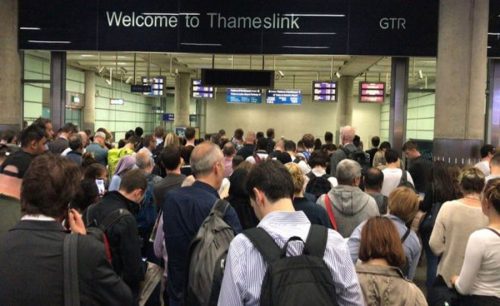 Train services in and out of London, including Thameslink, Southern and Gatwick Express were facing delays and cancellations. National Rail said a large number of train services had been affected. Transport for London said the Victoria line on the city’s underground system had been suspended and warned people to take extra care when using the roads because some traffic lights were not working. A hospital in the town of Ipswich said its back-up generator had failed. Western Power Distribution which serves the Midlands, South West and Wales said about 500,000 customers were affected. Northern Powergrid, which serves the North East, said 110,000 of its customers lost power, affecting the airport and metro system of the region’s biggest city, Newcastle. Those impacted lost power for up to an hour, according to local electricity distributors. The power cut added a moment of darkness to months of political drama over the country’s exit from the European Union. “Was that #powercut someone attempting to fix Britain by turning it off and on again?” joked Twitter-user Emma Clarke. “Country having a practice for no deal Brexit #powercut,” joked another Twitter user, referring to the potential economic disruption if the country leaves the bloc at the end of October without a withdrawal deal. The power cut occurred hours after Sajid Javid, the new finance minister in Prime Minister Boris Johnson’s government, visited a National Grid training centre on Friday.