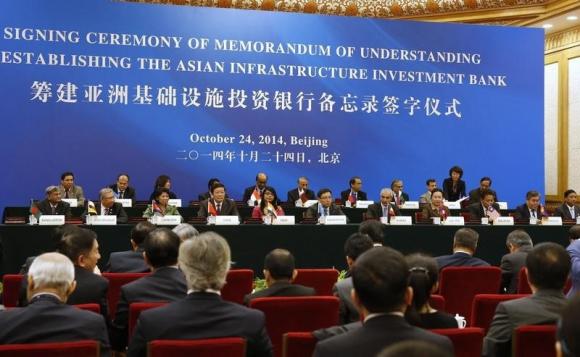 SEOUL - A senior US diplomat said it was up to individual countries to decide on joining a new China-led international development bank, as media reports said a growing number of close US allies were ignoring Washington's pressure to stay out of the institution. France, Germany and Italy have agreed to follow Britain's lead and join the Asian Infrastructure Investment Bank (AIIB), a major setback for Washington, the Financial Times reported. In China, the state-owned Xinhua news agency said South Korea, Switzerland and Luxembourg were also considering joining. The Financial Times, quoting European officials, said the decision by the four countries to become members of the AIIB was a blow for Washington, which has questioned if the new bank will have high standards of governance and environmental and social safeguards. The bank is also seen as contributing to the spread of China's "soft power" in the region, possibly at the expense of the United States. On Tuesday, Washington's top diplomat for east Asia signalled that the concerns about the AIIB remained, but the decision on whether to join was up to individual nations. "Our messaging to the Chinese consistently has been to welcome investment in infrastructure but to seek unmistakable evidence that this bank...takes as its starting point the high watermark of what other multilateral development banks have done in terms of governance," US Assistant Secretary of State for East Asian and Pacific Affairs Daniel Russel said in Seoul. "Every government can make its own decision about whether the way to achieve that goal is by joining before the articles of agreement are clarified or by waiting to see what the evidence looks like as the bank starts to operate," he told reporters. The AIIB was launched in Beijing last year to spur investment in Asia in transportation, energy, telecommunications and other infrastructure. It was seen as a rival to the Western-dominated World Bank and the Asian Development Bank. China said earlier this year a total of 26 countries had been included as founder members, mostly from Asia and the Middle East. It plans to finalise the articles of agreement by the end of the year. Japan, Australia and South Korea remain notable absentees in the region, though Australian Prime Minister Tony Abbott said at the weekend he would make a final decision on AIIB membership soon. South Korea has said it is still in discussions with China and other countries about its possible participation. Japan, China's main regional rival, has the biggest shareholding in the Asian Development Bank (ADB) along with the United States and the Manila-based bank is headed by a Japanese, by convention. Japan is unlikely to join the China-backed bank, but the head of the ADB, Takehiko Nakao, told the Nikkei Asian Review that the two institutions were in discussions and could cooperate. "We've begun sharing our experience and know-how," Nakao was quoted as saying. "Once the AIIB has actually been established, it's conceivable that we would cooperate," he said. China has said nations could join as founder-members of the AIIB until March 31, and that Japan was included in the invitation. – Reuters