Making a team who will always put Pakistan as first, not their own self: Imran 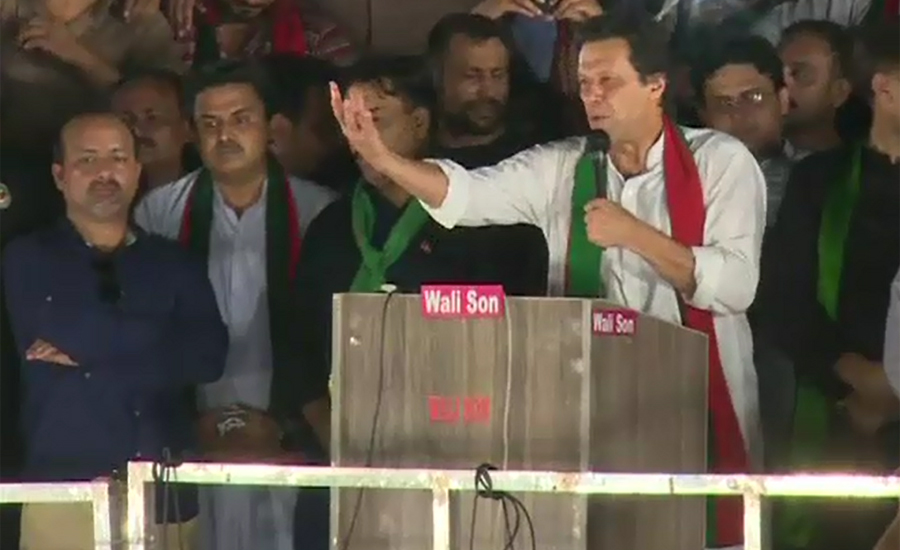 Making a team who will always put Pakistan as first, not their own self: Imran

SHAHDARA/JHELUM/KHANSPUR (92 News) – PTI chairman Imran Khan has said that a corrupt man cannot end corruption. Addressing public gatherings on Wednesday, he said that a corrupt man destroys the institutions so that no one could nab him. The PTI chairman said that he is making a team who will always put Pakistan as first not their own self. “I know Shehbaz is scared because for the first time he is not playing with his own umpires. You can check their record they are not in habit of playing with a neutral umpire,” he said. “I am so glad to hear Shehbaz saying that rigging should not happen. Finally, he is also raising the same issue that I have been talking since 2013.” Imran Khan said that the money that they take abroad helps their economy and not, people’s. “They needed to bring the money back which would create job opportunities here.” He said that after being imprisoned for 27 years, Mandela forgave his rivals. “Mandela had a bigger than life ideology and this is why he'll be remembered. In 10 years dollar went up from 60 to 128 rupees today while their assets keep multiplying because their assets are secured abroad,” he maintained. He accused the Khyber Pakhtunkhwa caretaker chief minister of siding with Akram Khan Durrani and Maulana Fazlur Rahman of the JUI-F. “The nation is paying the price for the theft and corruption of the rulers in the form of inflation. Owing to corruption of the rulers, money is not collected,” he said. Imran Khan said that the CM should play his role assigned to him. “I ask caretaker chief minister of KPK to remain impartial and do not engage yourself in wrongful actions against PTI candidates and workers. We freed the police in Khyber Pakhtunkhwa. Thirty-two FIRs have been registered against me,” he said. He said that the Adiala jail is waiting for Shehbaz Sharif as well. “Vote for PTI, Vote for Bat because this is the most significant time to take Pakistan along with Northern areas towards a prosperous and economically independent country.” Imran Khan said that the PTI people contesting the elections as independent candidates should keep themselves behind. “If they contested the elections, they will cause damage to the PTI,” he said. He asked the voters not to be fooled by false promises of other parties because they will never develop Northern areas. “PTI is the only party that has delivered according to its promises in KPK.” He said that local people in Ghaliat will develop skills in service management and hotel management to work in new ventures. “They will not have to go elsewhere to work. Every year we plan to develop four new tourist resorts in Northern areas. Local people will have huge opportunities to work and earn money locally. We will develop educational institutes in Northern areas where young people can learn the skills needed to develop tourism. Northern areas have huge potential of Tourism industry. Pakistan can earn more money from Tourism than total exports of Pakistan. Imran Khan in Nathiagali,” he maintained.