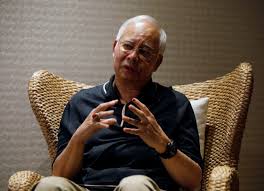 KUALA LUMPUR (Reuters) - Malaysia’s anti-graft agency has frozen bank accounts of the political party once led by former premier Najib Razak as part of its probe into beleaguered state fund 1Malaysia Development Bhd, media reported on Friday. Najib’s United Malays National Organisation (UMNO) is believed to have received funds from 1MDB, which is the subject of money laundering probes in at least six countries. Malaysia reopened investigations into 1MDB last month after a shock win by Mahathir Mohamad’s alliance, which defeated an UMNO-led coalition that had governed the country for over 60 years until last month. Two of UMNO’s bank accounts were frozen recently, The Star newspaper reported, citing sources. Ahmad Zahid Hamidi, UMNO’s acting president, received a call from the Malaysian Anti-Corruption Commission (MACC) on Thursday, informing him on the action on the bank accounts, the newspaper said. Spokespeople for the MACC and UMNO did not immediately respond to Reuters requests for comment. US authorities say over $4.5 billion was misappropriated from 1MDB, and that nearly $700 million from the fund was diverted into the former premier’s personal bank accounts. Najib has consistently denied wrongdoing, and in an interview with Reuters last week maintained that the $700 million was a donation from the Saudis. Since losing the election, Najib has been barred from leaving Malaysia, questioned by the MACC and has had his personal and family houses searched as part of the 1MDB probe. He also stepped down as UMNO president after the election loss. Earlier this week, police said nearly $275 million worth of jewellery, handbags, watches and other items were found at premises linked to Najib and his family. Authorities also found about $29 million in cash. Najib has said the money was for election purposes and that it came from “genuine donations”. Finance Minister Lim Guan Eng told Reuters earlier this month the government is looking to recover lost 1MDB funds, including from political parties that have received the fund’s money. He said UMNO was not the only political party to have received 1MDB funds. Prime Minister Mahathir, meanwhile, has said Malaysia is looking to bring a range of charges against Najib, including embezzlement and bribery. Late on Thursday, state news agency Bernama reported Mahathir as saying Najib will be prosecuted soon. “I think he (Najib) will be brought to the court soon,” Mahathir was quoted as saying on an official visit to Jakarta.