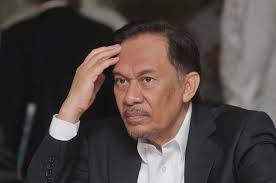 (Reuters) - Malaysia's highest court rejected on Tuesday an appeal by opposition leader Anwar Ibrahim against a sodomy conviction, sending the politician who poses the greatest threat to the long-ruling coalition back to prison for five years. The U.N. Human Rights office and Australia said they were disappointed by the ruling. Human Rights Watch condemned it as persecution and Amnesty International said it would have a chilling effect on freedom of expression. Anwar, the ruling party's rising star in the mid-1990s before he fell out with then Prime Minister Mahathir Mohamad, denied the charge that led to his second conviction for sodomy as a fabrication aimed at ending his political career. "I will walk again for the third time into prison but rest assured that I will walk in with my head held high," a defiant Anwar said in a statement he read out in court. "I maintain my innocence." Prime Minister Najib Razak's government has rejected any suggestion of interference in the case. "Malaysia has an independent judiciary, and there have been many rulings against senior government figures," the government said in a statement after the ruling. The United States said it was "deeply disappointed" with the conviction. "The decision to prosecute Mr. Anwar and the conduct of his trial have raised a number of serious concerns about rule of law and the fairness of the judicial system in Malaysia," National Security Council spokeswoman Bernadette Meehan said. Anwar criticized the court saying that in rejecting his appeal it was "bowing to the dictates of the political masters". "You chose to remain on the dark side and drown your morals and your scruples in a sea of falsehood and subterfuge," he told the judges who walked out of the court as he spoke. "I will not surrender," he said. Anwar later comforted his wife and children and had a meal with them before being taken to the Sungai Buloh prison, about 30 km (20 miles) from Kuala Lumpur. A court found the 67-year old former deputy prime minister guilty in March last year of sodomising a former political aide. The conviction disqualifies him from political office and contesting the next election that must be held by 2018. Nurul Izzah, Anwar's daughter who is also a political leader in his Parti Keadilan Rakyat, was also defiant. "This is not the end," said told reporters outside the court. Anwar is head of a three-party opposition alliance that made stunning gains in a 2013 general election which for the first time raised the possibility of a genuine challenge for the coalition that has ruled Malaysia since independence in 1957. The decision against him raises the prospect of a fresh bout of political agitation which could make investors even more cautious about putting money into an economy so heavily dependent on oil and gas revenues at a time when global prices are so PERSECUTION Anwar's party and the opposition alliance plan protests against the verdict. Hundreds of his supporters outside the court waved party flags and shouted "Down with Barisan Nasional", referring to the ruling coalition. "What has happened today is not fair but this has happened before ... we will keep fighting," said an Anwar supporter who identified herself as Salihah M, 36. Australia said it was disappointed and "deeply concerned" about Anwar's sentence. Phil Robertson, deputy Asia director for Human Rights Watch, called the court ruling a "travesty of justice". "Prime Minister Najib Razak's government has persisted in its politically motivated prosecution of opposition leader Anwar Ibrahim at the expense of democratic freedoms and the rights to non-discrimination and privacy for all Malaysians," he said. The U.N. Human rights office said sodomy should not be a criminal offence. Anwar has for years been the greatest threat to Malaysia's political establishment. His jailing could undermine the opposition's unity and the challenge it poses but it could also galvanize dissent. His political career has been turbulent since he was sacked in 1998 after falling out with then premier Mahathir and then campaigned against corruption and nepotism and led a nationwide "reformasi" (reform) protest movement. He has been beset by legal problems and spent several years in prison after being convicted of corruption and an earlier sodomy charge. Mahathir remains hugely influential and his old guard was critical of an attempt by Prime Minister Najib to introduce reforms after he came to power in 2009. Following the ruling coalition's worst ever election result, in the 2013 polls, Mahathir attacked what he called Najib's "bad performance". Some ruling party members and analysts have played down fear of upheaval in response to Anwar's return to jail. "Anwar's political image is not anywhere near close to what it was in the '90s," Wan Saiful Wan Jan, of the Institute for Democracy and Economic Affairs, said earlier. "The country has moved on."