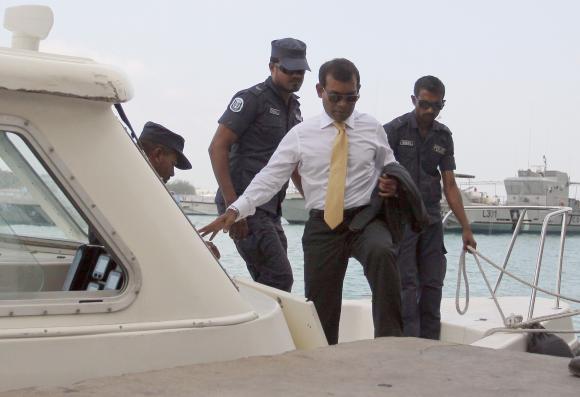 MALE (Reuters) - Former Maldives president Mohamed Nasheed will stay in police custody until his trial in a terrorism case is completed, a court ruled on Monday, prompting expressions of concern from the United States. Nasheed was arrested on Sunday after a criminal court said he might flee the country to avoid hearings on terrorism charges stemming from the arrest of Criminal Court Chief Justice Abdulla Mohamed during his presidency in 2012. He was brought to court on Monday, where he complained that police had dragged him there, injuring him in the process. "I have been shoved to the ground and my arm has been broken," he told the court. "Take me to a doctor and then you can issue your verdict." Judge Abdulla Didi gave Nasheed three days to appoint a lawyer and answer terrorism charges. He ordered police to hold him for the length of the trial. The treatment of Nasheed, the first democratically elected president of the Maldives, prompted comment from New Delhi and Washington. "We are concerned at recent developments in the Maldives, including the arrest and manhandling of former President Nasheed," India's Foreign Ministry spokesman said, adding that political parties should resolve their differences within the constitutional framework. New Delhi views the Maldives, a group of 1,190 coral islands southwest of India, as part of its sphere of influence. It has been concerned about China's efforts to boost its strategic presence in the Indian Ocean, including a visit by Chinese President Xi Jinping to the archipelago last year. The US State Department, which shares India's concerns about China's increasingly assertive posture in Asia, said US Assistant Secretary of State for South Asia Nisha Biswal had spoken to the foreign minister of the Maldives at the weekend to express US concern at Nasheed's arrest and other events in recent weeks. "She urged the government to take steps to restore confidence in their commitment to democracy, judicial independence, and rule of law, including respect for the rights of peaceful protest and respect for due process," State Department spokeswoman Jen Psaki told a regular news briefing. Nasheed resigned as president in February 2012 after weeks of protests against his order to arrest Abdulla Mohamed. A year later he lost an election to the current president, Yameen Abdul Gayoom. Nasheed's party called for India to intervene. "The situation has given a legitimacy for intervention through mediation," Hamid Abdul Ghafoor, a party spokesman said.