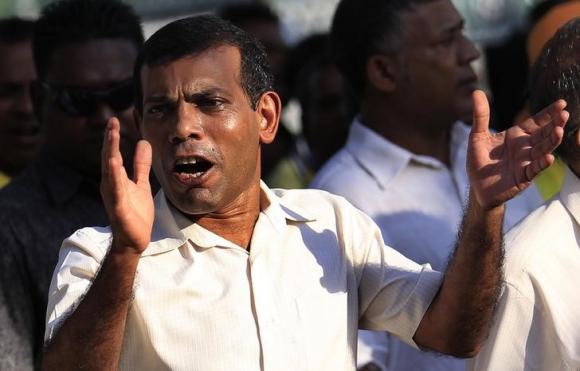 MALE (Reuters) - Police in Maldives arrested former president Mohamed Nasheed on Sunday after a court said he might flee the country to avoid hearings on terrorism charges, leading to clashes between his supporters and authorities. Nasheed, Maldives' first democratically elected president, had been facing criminal charges over his order to arrest a top judge in January 2011. Nasheed stepped down in early 2012, saying he had been overthrown in a coup. Last week the prosecutor-general withdrew the original charges against Nasheed, but issued an arrest warrant on Sunday under new charges of terrorism relating to the same incident of the arrest of the judge four years ago. The first hearing will be on Monday. Police used teargas to disperse protesters from Nasheed's Maldivian Democratic Party (MDP) as he was taken from his home. "I call on the public to do all that is necessary to stop the harassment meted out to me and other politicians to save Maldives," Nasheed told reporters in Male while being taken to a detention center on a separate island. Last week Nasheed asked India to intervene in case President Abdulla Yameen, to whom Nasheed lost the last election in 2013, imposed emergency rule. An opposition alliance between the MDP and Jumhooree Party, which broke away from Yameen's ruling coalition, has held a series of street demonstrations in recent weeks accusing the government of breaching the constitution a number of times. Earlier this month Defence Minister Mohamed Nazim was arrested on terrorism charges while MDP's chairperson Ali Waheed was taken into police custody on Sunday. Hamid Abdul Ghafoor, MDP's international spokesman, told Reuters they were planning a big protest on Feb. 27 and hoped some members of parliament would switch from the government to the opposition at the next parliamentary session on March 3. The MDP said in a statement it now feared the actions by the Maldives government may "lead to uncontrollable scenes of unrest and confrontations on the streets". Presidential spokesman Ibrahim Muaz Ali, however, tweeted: "I fully assure you this government won't arrest or detain any citizen unlawfully." Maldives is a group of more than 1,000 coral islands southwest of India.