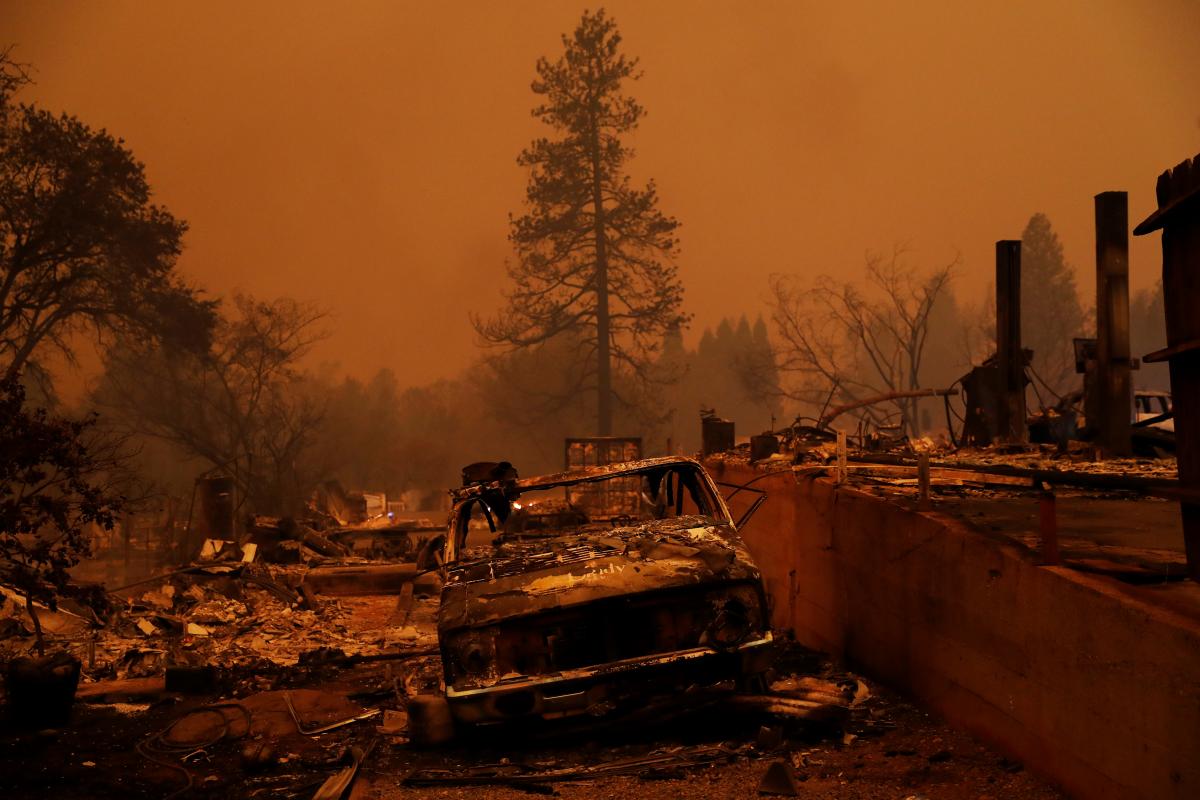 PARADISE, Calif. (Reuters) - Wildfires raged across California, where five people died in their cars while trying to escape flames engulfing a mountain town, and residents were forced to flee the upscale beach community of Malibu in the face of a monster firestorm. Hundreds of homes were believed destroyed in Paradise, California, some 90 miles (145 km) north of Sacramento, and officials feared the death toll could rise once crews put out the flames and inspect destroyed properties. In Malibu, some 500 miles (800 km) to the south, flames driven by hot Santa Ana winds gusting up to 50 miles per hour (80 kph) raced down hillsides and through canyons toward multi-million dollar homes. Thousands of residents packed the Pacific Coast Highway to head south or took refuge on beaches, along with their horses and other pets. Among those force to flee the Woolsey Fire, which had charred some 35,000 acres (14,164 hectares)  were celebrities, including Lady Gaga and Kim Kardashian, who said on Twitter flames had damaged the home she shares in nearby Calabasas with Kanye West. “Fire is now burning out of control and heading into populated areas of Malibu,” the city said in a statement online. “All residents must evacuate immediately.” Malibu and Calabasas, west of Los Angeles, are home to hundreds of celebrities and entertainment executives attracted by ocean views, rolling hills and large, secluded estates. The blaze, which spewed massive plumes of thick black smoke, also threatened parts of the nearby town of Thousand Oaks, where a gunman killed 12 people earlier this week in a shooting rampage at a college bar, stunning the bucolic Southern California community with a reputation for safety. The Woolsey Fire broke out on Thursday and quickly jumped the 101 Freeway in several places.It climbed over the Santa Monica Mountains toward Malibu. Authorities were forced to shut down the 101, a major north-south artery, as well as the Pacific Coast Highway. Los Angeles County Fire Chief Daryl Osby said a “significant number” of homes had been destroyed by the flames but that an accurate count could not yet be made. In Northern California the Camp Fire, has more than tripled in size to 70,000 acres (2,838 hectares) since erupting on Thursday and levelling parts of the town of Paradise, with a population of 26,000 people. In addition to the five people found dead in their vehicles, many were forced to abandon their cars and run for their lives down the sole road through the mountain town. In the aftermath, a school bus was among several abandoned vehicles left blackened by flames on one road. About 2,000 structures were destroyed in the area, officials said. The death toll is expected to climb, said California Department of Forestry and Fire Protection (Cal Fire) spokesman Scott McLean, because flames have blocked search and rescue crews from looking for victims in destroyed homes. “The only reason they found the five is because they were still on the road,” McLean said. California Acting Governor Gavin Newsom declared a state of emergency for areas affected by the Woolsey and Hill fires in Ventura and Los Angeles counties. The Hill Fire in Ventura County’s Santa Rosa Valley has charred about 6,000 acres (2,428 hectares), according to Cal Fire. In Los Angeles, another, smaller fire in Griffith Park forced the Los Angeles Zoo to evacuate a number of show birds and some small primates as flames came within less than 2 miles (3 km) of the facility, zoo officials said in a statement.