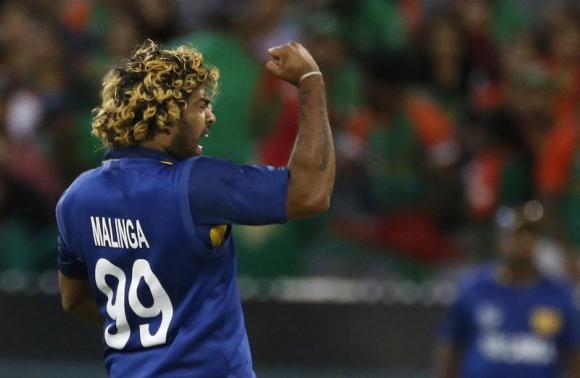 MELBOURNE (Reuters) - The toe-crusher is hitting the target, the bouncer is coming out well and, most importantly, the wicket column is swelling again. Three games into the World Cup and Sri Lanka's calculated gamble on Lasith Malinga appears to be paying off. Sanath Jayasuria knew exactly what he and his colleagues on the selection committee were doing when they picked the paceman with bleached, straw-coloured hair in the World Cup squad even though he was still recovering from ankle surgery. "A player like Malinga, we have to take a gamble because he is a match-winner," Jayasuriya explained after naming the 15-strong squad. The 31-year-old pacer with a weird low-slung action has not let him down and three games into the campaign, Jayasuriya has grounds for feeling some vindication. True, the rust showed in Sri Lanka's tournament opener against New Zealand in which Malinga bled 84 runs in his 10 wicketless overs. Against Afghanistan, while not the strongest of opponents, Malinga took 3-41 and looked more in control of his craft. The three wickets he claimed against Bangladesh on Thursday, however, suggested a return to his once devastating best was not that far away. "He's getting there. He and Sri Lanka will be encouraged by what he did," Sunil Gavaskar told STAR Sports channel. Gavaskar was impressed by Malinga's last few overs, particularly the way he sealed Sri Lanka's comprehensive win by trapping Taskin Ahmed plumb lbw, leaving the tail-ender with some sore toes in the process. "Towards the end, he was really bowling quick, he was getting those yorkers on target as we saw with the poor, hapless number 11," the former India captain said. The bouncer is also coming out of hand nicely, one of them accounting for the wicket of Sabbir Rahman, Bangladesh's topscorer at Melbourne on Thursday. "He does get those number 9-10-11 just like that. So it's coming back and it's good news for Sri Lanka," added Gavaskar. TOIL BEHIND TURNAROUND Angelo Mathews has seen the toil behind the turnaround from close quarters. "If you watch Malinga in the nets, he's the one who is working the hardest," Mathews said on Wednesday of his pace spearhead, whose performance is crucial to Sri Lanka's bid for a second 50-over World Cup title. "He bowls for hours so he can get his rhythm back. He tries very hard to do his best for the team. We all know how good a bowler he is, because the things he does when in form are immense." Malinga's pace has undoubtedly dropped, the rigour of 30 tests and 180 one-day internationals has taken its toll on his body and since spin-bowling great Muttiah Muralitharan's retirement, the pressure on him to perform has also grown. The right-arm paceman himself, however, is just focusing on fine-tuning the toe-crushers and bouncers which England's batsmen can expect to face in Wellington on Sunday. "He bowls three types of deliveries. The bouncer, the fast yorker and then the slow yorker. It's very, very difficult to pick up," former Australia batsman Dean Jones said. "He bowls two lengths -- it's very full or very, very short. Brilliant bowler, best in the world bowling in the death."