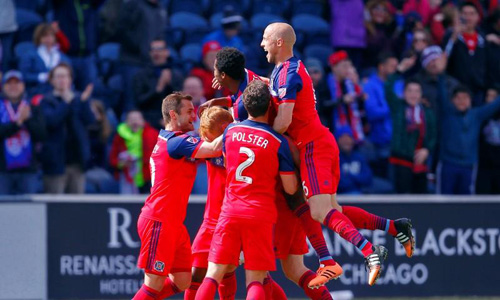 CHICAGO - Scotland winger Shaun Maloney inspired the Chicago Fire to a 3-2 win over big-spending Toronto FC in Major League Soccer on Saturday. The loss is the third straight for Toronto, who had invested heavily in the off-season to bring in Italy international Sebastian Giovinco and American striker Jozy Altidore. Chicago, losers of their opening three games before last week's victory over Philadelphia, made a bright start, taking the lead in the 14th minute. Maloney played a delightful backheel into the path of Joevin Jones who confidently slotted home. Six minutes later, Toronto drew level through their designated player, Giovinco, whose poked shot beat the wrongfooted John Busch in the Chicago goal. Former Juventus forward Giovinco then turned provider, breaking down the left and slipping a cross into the path of French midfielder Benoit Cheyrou who fired home. Chicago responded quickly with Maloney cutting in from the left and driving a low shot through a crowded penalty area and past Toronto keeper Joe Bendik. The Canadian side had defender Warren Creavalle sent off after a second yellow card in the 67th minute and a minute later Chicago grabbed the winner. Jeff Larentowicz fired in an indirect free-kick in the bottom corner of the net to give the Fire a deserved three points. The game was the fourth of seven straight away matches for Toronto whose stadium is undergoing redevelopment. - REUTERS