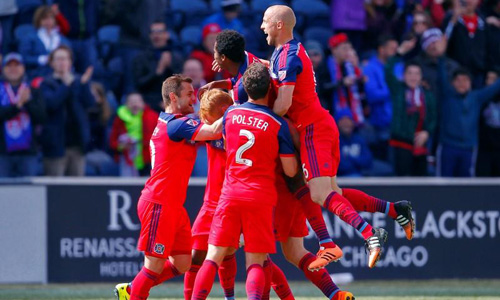 CHICAGO - Shaun Maloney inspired Chicago Fire to a 3-2 win over Toronto FC in Major League Soccer on Saturday. The loss is the third straight for Toronto, who invested heavily in the off-season and brought in Italy international Sebastian Giovinco and American striker Jozy Altidore. Chicago, losers of their opening three games before last week's victory over Philadelphia, made a bright start, taking the lead in the 14th minute. Scotland winger Maloney played a delightful backheel into the path of Joevin Jones, who confidently slotted home. Toronto drew level six minutes later through Giovinco, whose poked shot appeared to take a deflection on the way past a wrongfooted John Busch in the Chicago goal. Former Juventus forward Giovinco then turned provider, breaking down the left and slipping a cross into the path of Benoit Cheyrou, who guided the ball home. Chicago responded quickly, with Maloney cutting in from the left and driving a low shot through a crowded penalty area and past Toronto keeper Joe Bendik. The Canadian side had defender Warren Creavalle sent off after a second yellow card in the 67th minute and a minute later Chicago grabbed the winner when Jeff Larentowicz fired into the bottom corner after a free-kick had been slipped into his path. The game was the fourth of seven straight away matches for Toronto whose stadium is undergoing redevelopment. In later matches, Seattle beat Houston 1-0 through Obafemi Martins' 39th minute goal, while goals from Juan Agudelo and Lee Nguyen gave Revolution a 2-0 win over Colorado in New England. Vancouver defeated Galaxy 2-0 in Los Angeles while Portlandclaimed a 3-1 away win over FC Dallas. - REUTERS