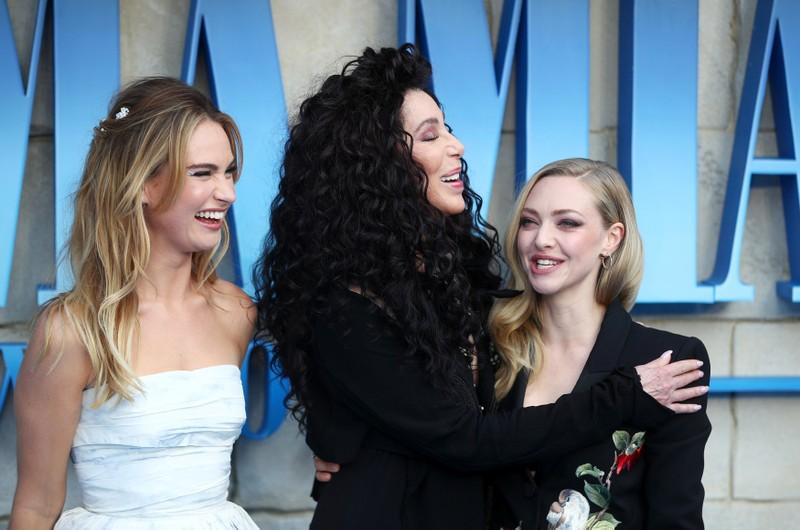 LONDON (Reuters) - Amid olive trees and plenty of ABBA tunes, the musical world of “Mamma Mia” took over a London theatre for the film sequel’s world premiere with Oscar winner Meryl Streep and pop diva Cher among the attendees. Ten years after the movie version of the hit theatre musical, “Mamma Mia! Here We Go Again” sees old faces return and new ones join the ABBA sing-along set on a picturesque Greek island where stars belt out tracks by the hugely popular Swedish band.
The plot follows on from the first film, which grossed over $600 million (453.38 million pounds) at the box office, but this time has flashbacks explaining how Meryl Streep’s character Donna arrived in Greece. While fans have highly anticipated the sequel, ABBA founding members Benny Andersson and Bjorn Ulvaeus said they were not so keen on the idea at first. “We were kind of protective of the first one because we were very proud of it, it was very good and it became kind of a cult movie ... and we thought what’s the point of risking ... taking away from that legacy, so we were reluctant,” Ulvaeus told Reuters. But the film writers’ idea of making the movie a sequel and prequel at the same time helped change their minds, he said. “I laughed out loud many times when I read (the script’s first draft). It was funny, it was moving so we said go ahead and here we are.” Chanting “Waterloo”, “Super Trouper” and “Dancing Queen”, fans cheered as Streep, Pierce Brosnan, Colin Firth, Amanda Seyfried and Christine Baranski - who starred in the 2008 film - arrived. The sequel’s cast additions include Lily James, who plays the younger Donna, and Cher, who portrays Donna’s mother. “I don’t know what I was expecting but I walked onto the set and I just thought everyone’s just having fun,” Cher said. Like the first film, the sequel has plenty of colourful and comic scenes. It also has touching moments, cast members said. “It’s a great time for this movie to be out in the world, because we’re all feeling a little down about the world right now,” Baranski said. “I think people are going to be transported to this beautiful Greek island with all these beloved characters and all these fabulous songs.” “Mamma Mia!” the musical originated more than 20 years ago and has gone on to have productions around the world with generations of fans still singing and dancing to ABBA songs some 40 years after their release. “It’s so humbling and I’m grateful but I cannot say I understand quite how that happened. It’s kind of a miracle,” Ulvaeus said of the band’s success. “Never in our wildest dreams did we think that these songs that we wrote would last for such a long time”.