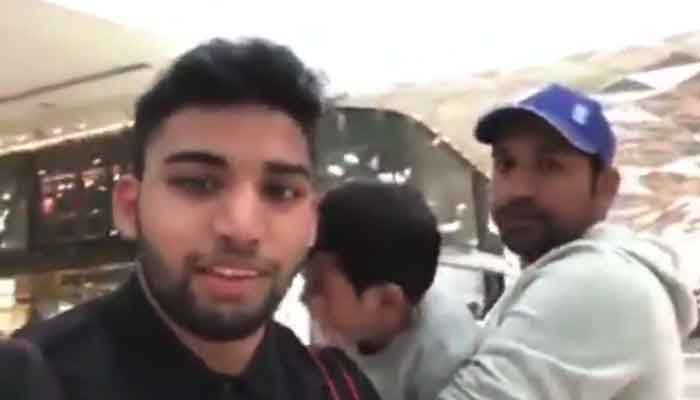 LONDON (Web desk) – The man – who used harsh words against Pakistani skipper Sarfaraz Ahmed when he was visiting a mall with his son – apologized for his offensive comments after strong criticism by the cricket fans. In his video message surfaced in social media, the man – who claimed to be a Pakistani – regretted his distasteful behaviour against Sarfaraz Ahmed. “I had no intention to share the video on social media as I had deleted the clip and apologised after meeting Sarfaraz,” he claimed. He further said that he had no idea how it went viral after deleting this video. The man said that he has repentance on his action that really hurt him.

Twitter is in an uproar after a video surfaced of a man taunting Pakistani cricket captain Sarfaraz Ahmed at a mall in England. He filmed himself asking Sarfaraz ‘why he had gotten fat like a pig’. Pakistanis may be upset that the cricket team hasn’t been performing well in the ICC World Cup, but that doesn’t mean they’ll take insults against their captain lying down. Twitter came for the man, with everyone from celebrities to politicians calling out the user for his crass language and behaviour. He posted an apology after the backlash but it was too little too late.

The boy who abuses Skipper Sarfaraz Ahmed, now apologising in this video. Good thing he accept his mistake but his act was disgraceful and criminal.#SarfarazAhmed pic.twitter.com/I5dkZXLx2b

This apology is utterly useless and meaningless. He is clearly upset because of the backlash he has received and shows no remorse for his disgusting actions. “Mujhe nahi pata tha wo Hafiz-e-Quran tha.” Ok then. #WeStandWithSarfaraz https://t.co/99dLJTPe1a

No! Shameless, disgusting sucker, calls himself a Pakistani! How about if we call him a pig before his kid at a public place, make a video & post on social media, unforgivable! https://t.co/txXRilPVsz

Earlier, a video went viral on social media, in which he is seen harassing Sarfaraz and harshly criticising his performance and fitness. However, the skipper didn’t respond to any abuse.