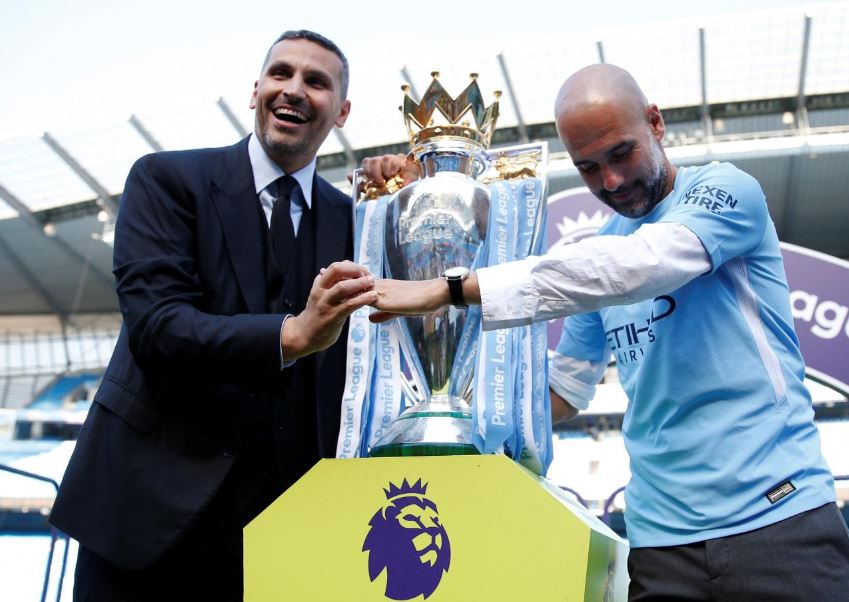 LONDON (Reuters) - Premier League champions Manchester City are driven by manager Pep Guardiola’s “relentless” desire for success and will be even hungrier for trophies next season, club chairman Khaldoon Al Mubarak has said. Former Barcelona and Bayern Munich boss Guardiola joined City in 2016 and guided them to the league title with a record tally of 100 points this season. "We have a manager in Pep who is relentless. There is not going to be any content or relaxation here, that I can assure you," Al Mubarak told City TV. “My expectation and the manager’s expectation, is that this team will continue to improve ... I have no doubt that this summer we are going to come back and be hungry and be more aggressive. We’ll continue to grow and improve.” Guardiola, who also led the team to the League Cup title, signed a contract extension last week that will keep him in the job until 2021. The Spaniard has brought a string of young players through at City with the attacking trio of England’s Raheem Sterling, Brazil’s Gabriel Jesus and Germany’s Leroy Sane combining for a total of 41 league goals this season. Al Mubarak said the City squad had been developed with future seasons in mind and that very careful consideration would be given to any additions for fear of disrupting the equilibrium. “This is a young squad. Many of our most talented players are under the age of 26,” the Emirati added. “Any additions have to improve the squad. This is my biggest learning from the years of chairing this club. “When winning, bringing new players in is a very important decision because you have a winning formula. “Whatever you’re going to add has to be a decision you don’t take very lightly at all. You have to bring in players that will strengthen, improve and add competition into the squad.”