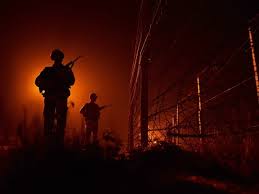 ISLAMABAD (92 News) - A man was martyred when Indian Border Security Force (BSF) resorted to unprovoked firing at the Line of Control (LoC) in the Rawalakot sector on Saturday. According to a statement issued by the Inter Services Public Relations (ISPR), Muhammad Aslam, 60, was cutting wood when he came under Indian firing and embraced martyrdom. Pakistani troops befittingly responded and silenced Indian guns, it added.