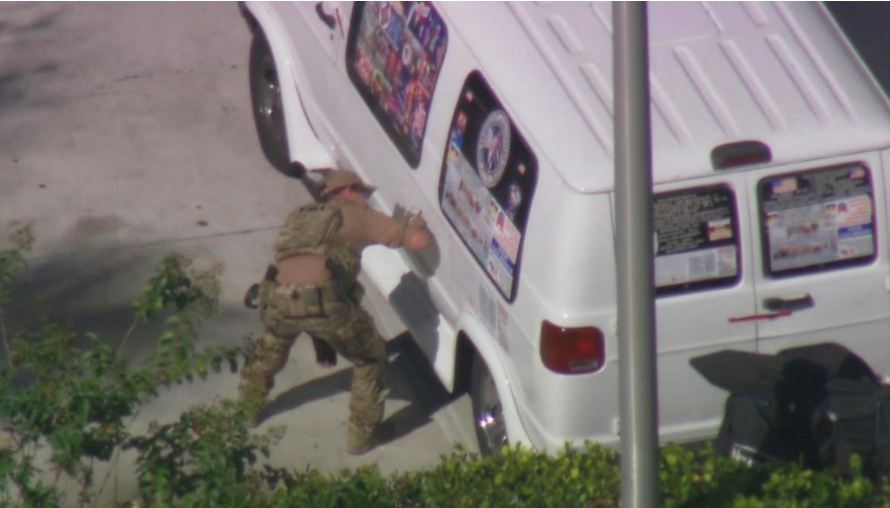 PLANTATION, Fl. (Reuters) - FBI agents arrested a man in Florida on Friday suspected of sending at least a dozen parcel bombs to high-profile critics of US President Donald Trump days ahead of congressional elections, authorities said. Two federal law enforcement officials named the suspect as Cesar Sayoc, 56. Two witnesses told Reuters they heard a loud blast as he was taken into custody in the parking lot of an AutoZone store in Plantation, near Fort Lauderdale. Announcing the arrest to a cheering audience at the White House, Trump said such “terrorizing acts” were despicable and had no place in the United States. “We must never allow political violence to take root in America - cannot let it happen,” Trump said. “And I’m committed to doing everything in my power as president to stop it and to stop it now.” According to public records, Sayoc is a registered Republican and has been arrested numerous times over the years including one case in which he was accused of making a bomb threat. Television images from Plantation showed investigators using a blue tarp to cover a white van, which was plastered with political decals and stickers including several of Trump, before removing it on a truck. A law enforcement source said the van belongs to Sayoc. The U.S. Justice Department was due to hold a news conference at 2:30 p.m. EDT. (1830 GMT). A federal law enforcement source said charges would likely be brought by federal prosecutors in Manhattan. No one had claimed responsibility for parcel bombs, which were denounced by authorities as terrorism, and came less than two weeks ahead of U.S. congressional elections that could alter the balance of power in Washington. Police found two of the suspicious packages on Friday addressed to U.S. Senator Cory Booker and James Clapper, the former US director of national intelligence, officials said. The 11th package was addressed to Booker, a Democratic senator from New Jersey, and was discovered at a mail sorting facility in Florida, the FBI said. A 12th package was addressed to Clapper at cable network CNN and was intercepted at a New York City post office, a federal law enforcement official said.