Mandhana, Kaur impress in first 'A' game against Australia

Mandhana, Kaur impress in first 'A' game against Australia

NEW DELHI (92 News) - A quick half-century from Smriti Mandhana and Harmanpreet Kaur's 45 helped India A beat Australia A by four wickets in the first Twenty20 match in Mumbai.

India, who have named a full-strength squad for the series that also acts as their preparation for the upcoming ICC Women's World Twenty20 2018 in the Caribbean, were led by their captain and vice-captain as they made light work of the 161-run target set by the Australians, who had earlier swept the one-day series 3-0. After winning the toss and choosing to bat, Australia were helped by Heather Graham, who top scored with 43 to lead her team to a competitive 160/6 in 20 overs. But a fluent 72 off just 40 balls by Mandhana and a 39-ball 45 by Kaur helped India coast to the target. 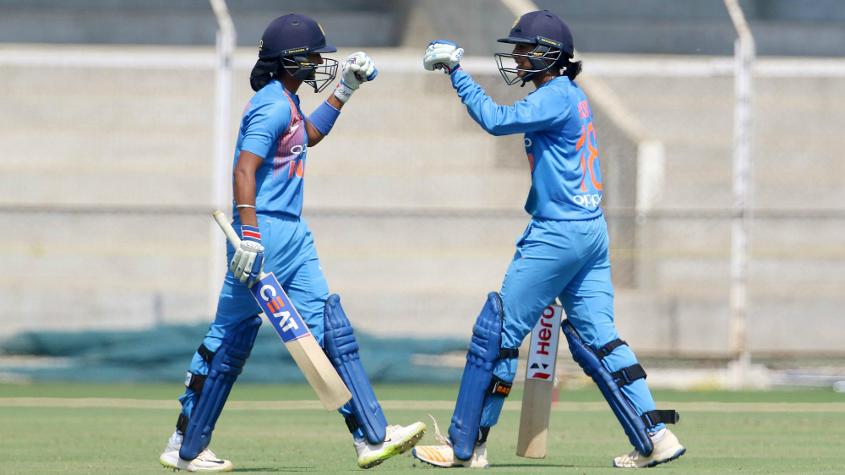 Although India lost opener Jemimah Rogrigues and wicket-keeper batter Taniya Bhatia early for low scores, the Mandhana-Kaur combination successfully countered the Australian bowlers and added 116 runs for the third wicket. Mandhana was particularly aggressive, hitting seven fours and four sixes in her innings, while Kaur hit six fours and one six. The two batting stalwarts of the team fell in quick succession to leave India at 126/4, and Anuja Patil and Dayalan Hemalatha were dismissed too, but all-rounder Pooja Vastrakar took on from there, scoring an unbeaten 21 off just nine balls to take their team home with an over to spare. Earlier, Deepti Sharma picked up 2/30 and Patil took 2/22 as India restricted Australia after a good start. Openers Josephine Dooley (16) and Tahlia McGrath (31) added 48 for the first wicket, and Naomi Stalenberg then added 78 runs with Graham for the third wicket to take Australia past the 100-run mark. But India picked up four wickets in the last five overs to curb Australia's scoring rate. The second match of the series will take place on Wednesday at the same venue, Mumbai's Bandra-Kurla Complex.