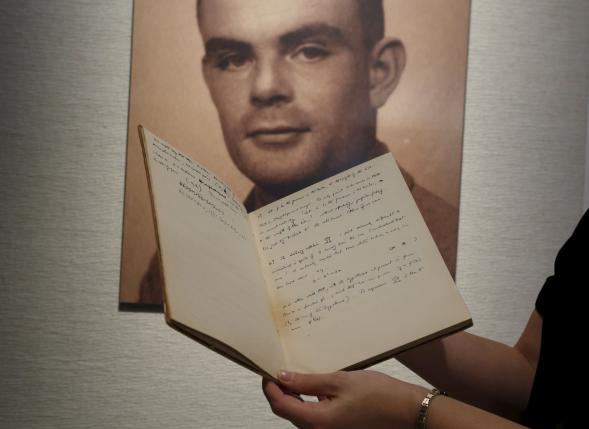 NEW YORK - A 56-page handwritten notebook that belonged to World War Two Nazi code breaker and computer pioneer Alan Turing, played by actor Benedict Cumberbatch in the film "The Imitation Game," sold for more than $1 million at an auction in New York, Bonhams said on Monday. Turing, a British mathematical genius, led a team of cryptographers who cracked the wartime Enigma code, which the Germans had considered unbreakable. Their work is credited with hastening the end of the war and saving lives. Cassandra Hatton, senior specialist in Bonhams' fine books and manuscripts department, said the result of the auction as a testament to Turing's legacy. Bonhams declined to name the buyer. "It reflects his importance in history. I think he is someone who merits further study, and I hope this contributes to increased interest in him and his work," she said in an interview. The auction also reaffirms a growing interest in scientific material, the history of computers, space, exploration and early science, she added. Part of the proceeds from the sale will go to an unspecified charity. The notebook, which had never been seen in public, is considered the only existing, extensive manuscript by Turing. It dates back to 1942 and was left to his friend Robin Gandy. In it Turing worked on mathematical formulas and the basics of computer science, giving insights into the workings of his brilliant mind. Gandy added his own notes between the pages of Turing's musings and kept the notebook hidden until his death. Turing, a homosexual, never received credit for his groundbreaking work during the war. He committed suicide in 1954 at the age of 41 while receiving hormone treatment. It was an alternative to imprisonment after he was charged with gross indecency in 1952 for having sex with a man. Homosexual sex was a crime at that time in Britain. Sixty years after his death Turing received a rare, royal pardon by Queen Elizabeth for his gay conviction. Cumberbatch received a best actor Academy Award nomination for his portrayal of Turing in the film, which won an Oscar for best adapted screenplay. The film is based on the book, "Alan Turing: The Enigma," by Andrew Hodges. "This notebook shines extra light on how, even when he was enmeshed in great world events, he remained committed to free-thinking work in pure mathematics," Hodges said in a statement. - Reuters