Marigold Hotel's Dench still driven by lure of the new 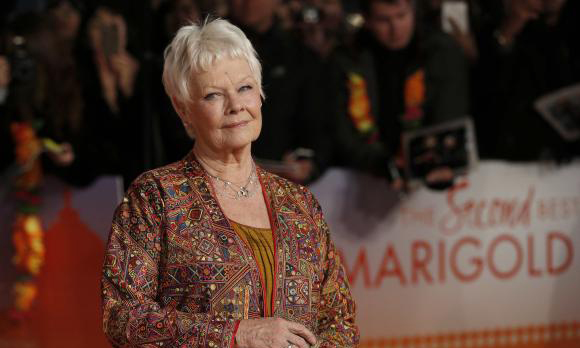 Marigold Hotel's Dench still driven by lure of the new

LONDON (Reuters) - After a career spanning seven decades, Oscar-winning actress Judi Dench rails against the notion of enforced retirement every bit as much as the character she plays in her latest film. The Second Best Exotic Marigold Hotel renews our acquaintance with a guest list of fading Brit retirees whose lust for life is reinvigorated by the fresh and unpredictable environment they find themselves cast into. Holder of the unofficial title of Britain's favorite actress since well before she turned 80 in December, Dench plays Evelyn, a widow who ends up running a business in her new home. The film offers a mix of Indian and British themes, laced with hints of British comedy classics like Fawlty Towers and One Foot in the Grave and dominated by the rough-edged characters played by Dench and fellow octogenarian Oscar winner Maggie Smith. Their experiences are worlds away from the grim, one-dimensional fate Dench says awaits many Britons as care home residents. "I always think that our system over here is the wrong one," she told Reuters. "When you go in and you see people just sitting, you think there is no stimulus. "It is interaction with people that stimulates us. To put all these people in a room, where maybe the television might be on but half of them may not even be able to see it. That's wrong." She has ridden out problems with deteriorating eyesight and says she has much more work in her yet. "I'm fine, once I know where everything is," she said. "At home I know where all the steps are. I wouldn't be good going into a darkened room, like in a cinema where I can't see where the steps are, so I get someone to be with me." Dench made her professional stage debut in the 1950s, and for much of her career as a leading light of Shakespearean theater, she and husband Michael Williams ran a household that included her daughter and three of their four parents. "Sometimes it wasn't easy but it is worth it. Even the thing of one complaining about the other, it's something, it's a life, it's something to get heated up about and not just sit in a chair." She sees threads of such multi-generational living running through the Indian backdrop to the new film and says Britain has something to learn from communities "where the family is all kept together, where there is a family unit". "As a society we are still a bit cold," Dench said. "It's just the thing of stimulus I think. I'm such an advocate for not stopping, just going on and being challenged. I long to do ...the sort of things that I haven't done before. And I will."