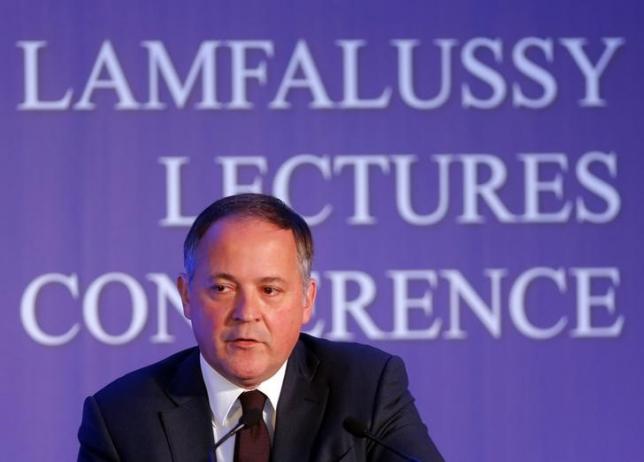 FRANKFURT – Europe's financial market turmoil could delay a rise in inflation even further and banks will need to be fixed with forceful action over time, European Central Bank Executive Board member Benoit Coeure told a German newspaper on Saturday.

The euro area inflation outlook is already weighed down by sharply lower oil prices and slowing global growth, and the market volatility is compounding the problem, Coeure told Rheinische Post.

"If that (volatility) continues for too long, it can also increase the risk of a rise in inflation being delayed," Coeure said.

Euro zone bank shares .SX7E. are down nearly 30 percent since the start of the year on concerns about profitability, potentially increasing the cost of capital for banks and holding back lending. That could reduce the effectiveness of the ECB's 1.5 trillion asset buying programme, its key monetary policy tool.

The ECB is buying assets, mostly government bonds, to boost lending and raise inflation back to its target of nearly 2 percent from around zero after three straight years of misses.

Coeure said banks are facing low profitability and some are struggling with a high level of non-performing loans, a legacy of the Europe's economic crisis. But they are also more resilient than in the past, thanks to years of capital increases.

"None of these challenges are new: they have been clearly identified, they require forceful action and they will be solved over time," Coeure said.

Coeure added that it was also up to euro zone governments to enact growth friendly policies, which could then boost output and eventually help boost banking profitability.

"If this does not happen, we will have to keep rates low for a very long time," he added.

"Our advice to euro area governments is to use the savings gained from the lower cost of debt refinancing in a growth-friendly way to help their citizens," Coeure added.

He said government should reduce taxes on labour, create more incentives for private investment, or reduce their deficits where required. –Reuters