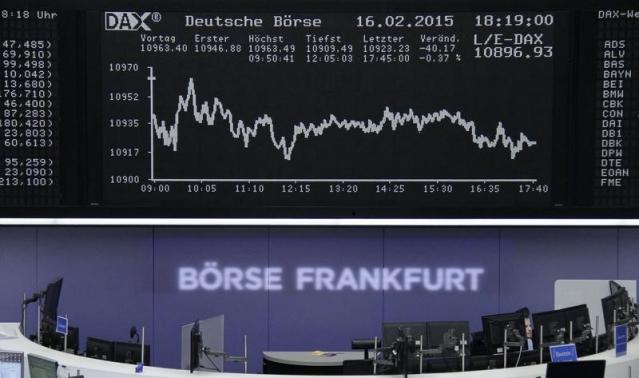 LONDON (Reuters) - Stocks fell and lower-rated euro zone bond yields rose on Tuesday after talks between Athens and its European partners over the country's debt crisis collapsed, raising doubts about Greece's future in the currency bloc. The broader market was not in panic mode, however. The euro was only slightly lower and equity market losses, outside Greece, were slim as investors held out hope for a deal after Greece's finance minister voiced confidence that an agreement on different terms was within reach. "The failure (of the talks) raises somewhat the 'tail risks' that no deal will be reached by month-end to avoid a disorderly conclusion," said Chris Scicluna, head of economic research at Daiwa Capital Markets Europe. "(But) we should still expect a compromise eventually to be found before the end of the month to preserve stability and maintain Greece within the euro area." Both sides raised the prospect of another attempt to find common ground before the end of this week, but patience has frayed on both sides and time is running short. The European Central Bank is set to decide on Wednesday whether to maintain emergency lending to Greek banks, and the state faces some heavy loan repayments in March. Greek markets were among the worst hit in Europe, with Athens' main ATG share index down by more than 4 percent and Greek three-year government bond yields up 2 percentage points at 19.72 percent. The pan-European FTSEurofirst 300 equity index fell 0.6 percent. Without support from creditors, the Greek government and banks would face a looming euro cash crunch, possibly opening the way for Greece to become the first country to ditch the common currency altogether and re-introduce its own currency. "A failure to reach an agreement in the coming weeks could easily trigger bank runs, ECB liquidity withdrawal, and even a Grexit (from the euro)," said Jan von Gerich, strategist at Nordea. "The stakes are thus high." The MSCI all-country world stocks index was down 0.2 percent, after touching its highest since September on Monday. Japan's Nikkei share average and MSCI's broadest index of Asia-Pacific shares outsideJapan both dipped 0.1 percent. In commodities markets, Brent crude prices extended their rally beyond $62 a barrel on Tuesday as the International Energy Agency warned of supply risks in the Middle East, although some analysts said that prices had risen too far from six-year lows hit in January. The crude rally helped support the Russian rouble which also rose thanks to political efforts to make a ceasefire hold in eastern Ukraine, but gains were capped by uncertainty about the ceasefire's fate.