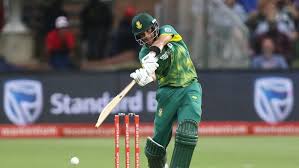 CAPE TOWN (92 News) – Aiden Markram, the South Africa opener, said he was happy to move down the order to the No 4 slot left vacant by AB de Villiers’s sudden retirement a fortnight ago. With just about a year left for the ICC Cricket World Cup 2019, South Africa have a major hole to fill. Markram, 23, featured at No.4 in the Durban ODI against India in February, and has also played in that position for the Titans. However, he admitted he wasn’t used to playing down the order. “It's a little bit foreign to me, having opened for most of my life, but there have been a few white-ball games with the Titans where I have batted at No 4," Markram told Sport24. “It's a little bit different, but at the end of the day, it's the ball and the situation you've got to play. If I ever got given that opportunity I would take it with open arms.” Markram has impressed in Tests, scoring 1000 runs in 10 matches at an average of 55.55, and is eighth in the MRF Tyres ICC Test Batsmen's rankings. However, he is yet to replicate that form in ODIs – in seven outings, he has 193 runs at 27.57. Markram stressed that the objective must not be “to find the next AB de Villiers”. "I don't think it's a case of trying to find the next AB de Villiers, because we will never manage to find another player like that," he said. “It's still quite important that whoever does fill that role makes it their own and plays their own game in that role. Whether you get the job done like AB does or whoever ... as long as the job gets done." Markram added that, with plenty of good players coming through, the South Africa selectors would have a problem of plenty. “It's going to be an interesting selection headache,” he said. “There are a lot of good players coming through. You've got a guy like Heinrich Klaasen and a guy like Temba (Bavuma) who might come into the mix now. It's going to be interesting.”