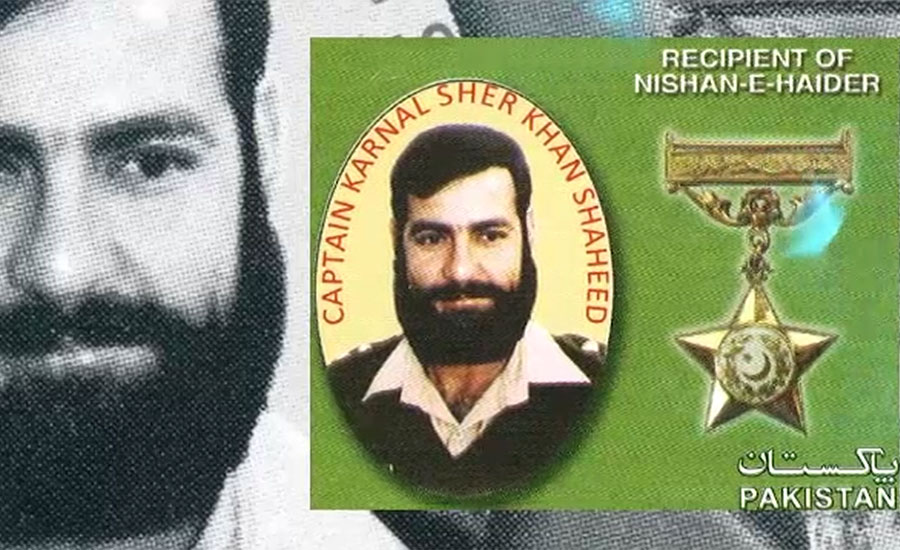 LAHORE (92 News) - Lion of Kargil, Captain Karnal Sher Khan 20th martyrdom anniversary observed on Friday. Meanwhile, Fateha khwani was offered at the grave of Karnal Captain Sher Khan Shaheed at his native village of Nawakali in district Swabi today. A floral wreath was laid at the mazar. He was awarded “Nishan-i-Haider” for exemplary defending the snowy peaks during Kargil Operation and his name has written in golden words in history. He embraced martyrdom on July 5, 1999 while successfully defending the Kargil’s five strategic posts at the height of 17000 feet on Line of Control. Eight times Indian Army tried to attacked the strategic posts of Gultry at Kargil and every time Karnal Sher Khan was there to defend the snow hidden peaks. Captain Karnal Sher Khan’s grandfather also took part in Kashmir ‘Jihad’ in 1948 and valiantly liberated large area of Kashmir valley which is now Azad Kashmir. His grandfather had wished someone from his family would accomplish the liberation of Kashmir. His grandfather gave Sher Khan title of ‘Karnal’ (a localized version of colonel). In interview with a private TV channel, Karnal Sher Khan’s younger brother told presenter Moeen Akhtar, that his brother always recite Pashto’s two verses “If whole world become heaven I will not give the mud of my country’s land. If my countries need my blood I will shed my blood for my country.” Sher Khan was born on 1 January 1970. He was commissioned in the Army on 14 October 1994. Captain Karnal Sher Khan emerged as the symbol of mettle and courage during the Kargil conflict on the Line of Control. He set personal examples of bravery and inflicted heavy losses on the enemy. He defended the five strategic posts, which he established with his jawans at the height of 17,000 feet at Gultary, and repulsed many Indian attacks. After many abortive attempts, the Indians on 5 July 1999 ringed the posts of Captain Karnal Sher Khan with the help of two battalions and unleashed heavy mortar fire and managed to capture some part of one of his posts. Despite facing all odds, he led a counter-attack and re-captured the lost parts of his post. But during the course, he was hit by the machine-gun fire and embraced “martyrdom” at the same post.