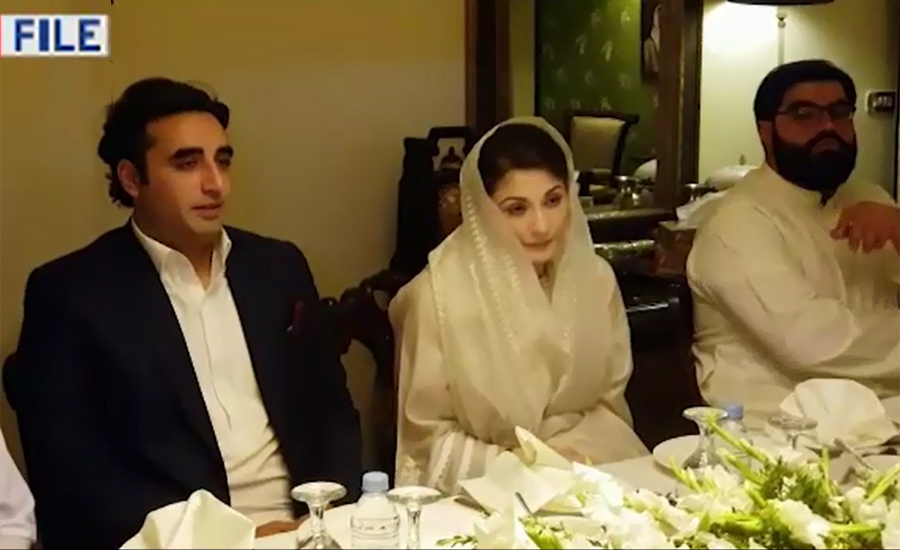 LAHORE (92 News) – PML-N leader Maryam Nawaz has invited PPP chairman Bilawal Bhutto for a meeting at Raiwind on Sunday. The invitation was extended during a phone call made by Maryam Nawaz. Sources in the PML-N said that the PPP chairman will visit Jati Umra at 1:30pm. They added that close aides of both parties will participate in the meeting. Leaders of both parties will exchange their views about the arrest of leaders by the government. During a meeting in Ramazan, it was decided that the anti-government movement will be given the final shape after Eidul Fitr. In this regard, the role of JUI-F chief Maulana Fazlur Rahman will be vital.

On June 12, Pakistan Muslim League-N (PML-N) Vice President Maryam Nawaz on Wednesday predicted that Prime Minister Imran Khan will soon flee from the country to London. Addressing a public gathering in Zafarwal, responding to premier’s address, Maryam Nawaz lashed out at Imran Khan and said, “You do not have the capacity to give National Reconciliation Ordinance (NRO) to anyone.” Maryam said that the former premier Nawaz Sharif would have got the NRO long ago if he wanted to get one, adding the he is still standing by his words in the jail. She also claimed that the premier would himself seek NRO after few days. Criticizing PM Khan, she underscored, “A man who has relied on others throughout his life cannot understand the problems of a common man. “A man who never worked hard in life cannot understand how bread (roti) is cooked in the home of a hard-working labourer!” “Not only should Niazi be told to go but he should be dropped home as well,” Maryam said, using PM Khan’s last name. Maryam Nawaz has said that separate laws prevailed in the country for masses and the prime minister, who she claimed came into power by stealing the public mandate. “Fake prime minister [Imran Khan] used to say there were separate laws for rich and poor in Pakistan, but the fact is that there is one law for rich and poor and the other for the selected PM,” she maintained. “Someone who has come into power by stealing votes would never stand for the rights of people,” she added. “He [PM Imran] talks about forming commission to probe debt in the last 10 years but doesn’t have the courage to audit loans acquired during Musharraf’s era … his own government, on the other hand, has broken all records of acquiring loans during their first 10 months in power.” Maryam said that the inquiry commission will be formed, but to probe incompetence of Prime Minister Imran Khan’s government. “You will be held answerable for your performance.” She also mocked the premier's statement during his address that the cases against PML-N and PPP leaders were not instituted by his government, but by the National Accountability Bureau (NAB). She asked whether it was only NAB's fault, and not Imran's, if the accountability watchdog filed corruption cases against PML-N leaders but did not investigate allegations against the prime minister or his sister, Aleema Khan.