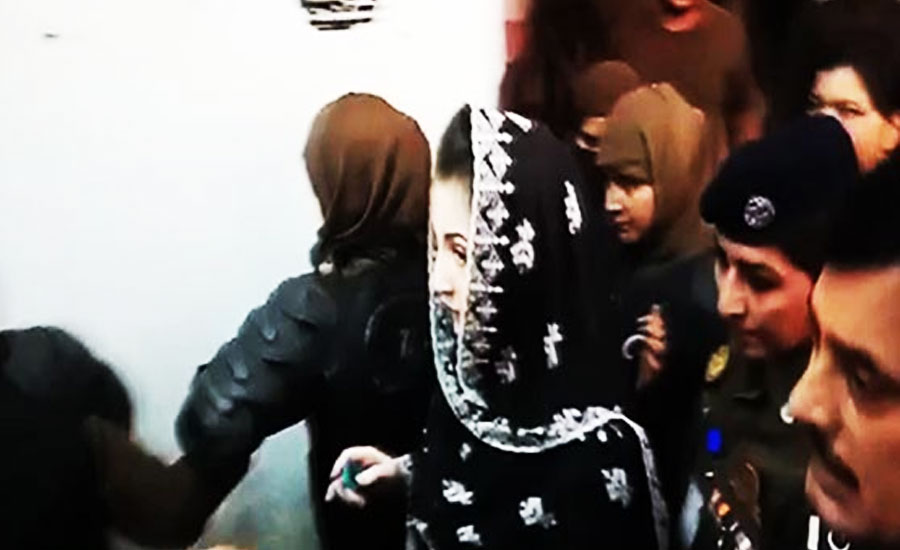 LAHORE (92 News) – An accountability court on Wednesday has extended judicial remand of Pakistan Muslim League-N (PML-N) vice president Maryam Nawaz and her cousin Yousaf Abbas till October 25 in Chaudhry Sugar Mills case. During the hearing, the National Accountability Bureau (NAB) official informed the court about reference against the Sharif family members. The NAB stated that the reference of Chaudhry Sugar Mills case is in the final phase and after approval of NAB chairman will be submitted. The judge expressed anger over slogans raised by PML-N workers. Maryam Nawaz also telephoned former prime minister Nawaz Sharif in the courtroom. She inquired the health of her father. Speaking to the journalists, Maryam Nawaz said that she is being subjected to political revenge as she has no link with Chaudhry Sugar Mills case. Strict security measures have been taken to avoid any untoward incident. Earlier on October 15, a combined NAB investigation team had interrogated former premier Nawaz Sharif in Chaudhry Sugar Mills corruption case. However, he was unable to record satisfactory answers. On August 8, NAB team had detained Maryam Nawaz outside the Kot Lakhpat Jail in Lahore for skipping appearance in Chaudhry Sugar Mills due to meeting with her father and former Prime Minister Nawaz Sharif. Maryam Nawaz was unable to provide the required details of foreign investment in sugar mills while she was also failed to satisfy the bureau regarding source of income for purchasing the shares. NAB has also claimed that three foreigners had transferred 11000 shares worth millions of rupees on Maryam Nawaz’s name. The anti-corruption watchdog’s daycare centre was declared sub-jail for the PML-N leader while female police and NAB personnel were deployed for her.