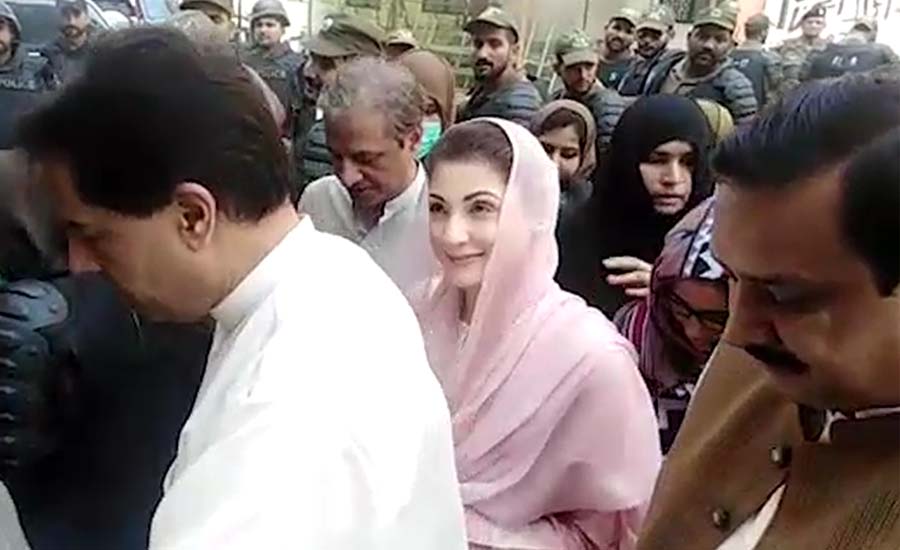 LAHORE (92 News) – A two-member bench of the Lahore High Court (LHC), hearing the bail plea of Maryam Nawaz, on Tuesday issued notice to NAB Chairman Justice (Retd) Javed Iqbal, seeking the reply by October 14. The counsel for Maryam Nawaz contended that his client is the daughter of the prime minister elected thrice. “Nawaz Sharif took several steps for the progress of the country. The accused’s family has political background,” he stated. The counsel said that his client is being targeted politically by constituting a baseless case of money laundering. “The SECP has not written a letter to the NAB for filing a reference against Maryam Nawaz. The NAB cannot interfere in the company case,” he stated. He said that the NAB had arrested Maryam Nawaz by misusing the law. “The Sharif family has declared its all properties and assets in the Panama Leaks case,” he said. The counsel appealed to court to release Maryam Nawaz on interim bail till final verdict in the Chaudhry Sugar Mills Reference and the money laundering case. The PML-N stalwart is currently in the jail on judicial remand in the Chaudhry Sugar Mills reference along with her cousin Yousaf Abbas. Maryam Nawaz was unable to provide the required details of foreign investment in sugar mills while she was also failed to satisfy the bureau regarding source of income for purchasing the shares. NAB has also claimed that three foreigners had transferred 11000 shares worth millions of rupees on Maryam Nawaz’s name. Earlier, accountability court had rejected NAB’s plea seeking extension in Maryam’s physical remand and sent her to jail on judicial remand till October 9. On August 8, NAB team had detained Maryam Nawaz outside the Kot Lakhpat Jail in Lahore for skipping appearance in Chaudhry Sugar Mills case due to meeting with her father and former Prime Minister Nawaz Sharif. Chaudhry Sugar Mills case In a press conference, Special Assistant to the Prime Minister on Accountability Shahzad Akbar had said the Sharif Family had used Chaudhry Sugar Mills for money-laundering and illegal transfer of its shares. During the probe, it was revealed that a $15 million loan was taken on the pretext to set up the mill despite the fact that it had already been established before the loan was acquired, the special assistant claimed. He had added that the loan was never transferred to Pakistan as shown by the record of the State Bank of Pakistan. He had said more than Rs7 million worth of shares were transferred to PML-N vice president Maryam Nawaz in 2008 through mill’s shares, which were later transferred to Yousaf Abbas Sharif in 2010.