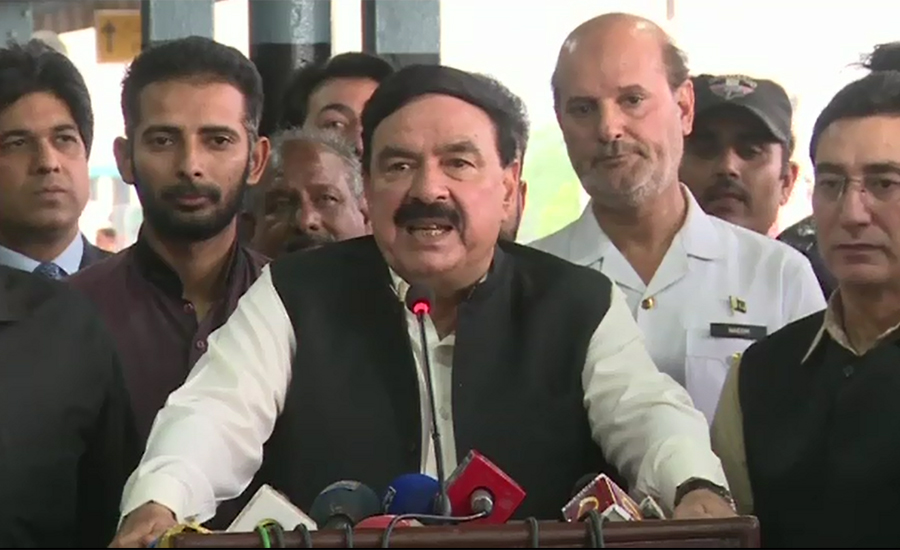 ISLAMABAD (92 News) – Minister for Railways Sheikh Rasheed has held Maryam Nawaz responsible for the problems of Nawaz Sharif. Talking to the media on Thursday, he said that there are two Muslim Leagues – Nawaz Muslim League and Shehbaz Muslim League. “I and Shehbaz Sharif have the same party,” he said. Sheikh Rasheed said that Nawaz Sharif was suffering from a disease that cannot be treated in Pakistan. “Asif Zardari is availing the facilities in the NAB custody which are not available in a five-star hotel,” he added. He said that the progress towards the Economy Charter was underway.

Earlier, Railways Minister Sheikh Rasheed has predicted more arrests in the coming fortnight. Addressing a press conference on Saturday, he said that cases and witnesses against Asif Zardari are serious. “Plunderers will have to be answerable,” he said. The minister said that Bilawal Bhutto should launch a movement against his father and aunt. “It is the Guinness world record that former president and prime minister are in jail,” he added. Sheikh Rasheed ruled out the possibility of the presidential system in the system. “The government of Asif Zardari and Nawaz Sharif cannot return,” he added. He said that they had contacted private people after launching a high-speed train. “The Command and Control system will become active in a month. The decision has been made to install trackers in all trains,” he said. The minister said that Prime Minister Imran Khan will inaugurate Sir Syed Express, which will depart from Rawalpindi and reached Karachi via Faisalabad, on June 30.

Minister for Railways Sheikh Rasheed Ahmad said that the current system cannot be labeled as democracy because such ‘disabled’ (so called) democracy can be turned into tragedy any time. Speaking to the journalists, the railways minister termed that in the current system the people get interim bail till nine months. “If people are being awarded bails on official holidays then that system can’t be labeled democracy,” he added. Commenting on the PPP and the PML-N leadership Sheikh Rasheed opined that both the juggernauts of their respective parties are done for and can’t make a comeback to the political arena. He further said that the N League party is occupied by former prime minister Nawaz Sharif, however, Shehbaz Sharif was here to put on a show for the media and his return in essence is hollow. “Shehbaz is here to play a little with the media and will skedaddle back to London post the budget session,” he said. “Shehbaz is acting up, no one is out to arrest him,” he claimed. He re-iterated the fact that he does not see any political future for the like of former president Asif Zardari and Nawaz Sharif. The railways minister announced to replace the stairs with lift and escalators at Lahore Railways Station.