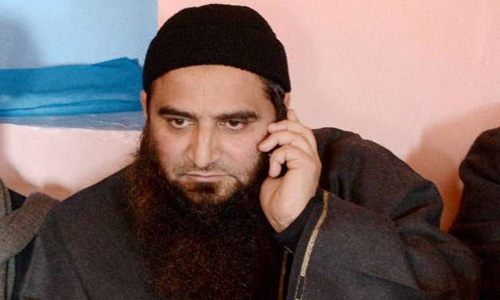 SRI NAGAR (92 News) – A day after he was placed under house arrest, Kashmiri Hurriyat leader Masarat Alam was arrested for raising pro-Pakistani slogans and waving a Pakistani flag in Srinagar on Friday. Despite the arrest, Alam remained firm and said that the scheduled rally in Tral against the death of a youth killed by the Indian Army will continue as planned. “We’ve been threatened of consequences. This is not something new for us,” he said. “Indian treatment has not changed one bit in the past 68 years. This is what they do to people calling for our right to freedom.” Hurriyat leader Syed Ali Shah Geelani is also under house arrest. Both the Hurriyat leaders were scheduled to hold a rally in Tral area of the occupied Kashmir. Earlier, Masarat Alam waved the Pakistan flags to greet Geelani at a rally in Srinagar on Wednesday. During the rally, Alam, released from jail in March, had praised Pakistan and called for Independence.