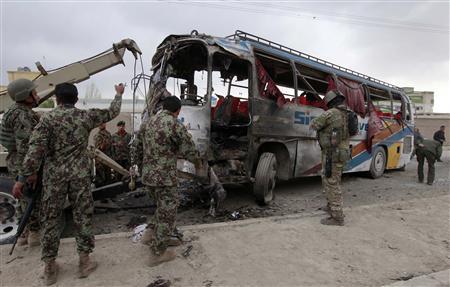 KABUL - Masked gunmen attacked a bus about an hour's drive from the Afghan capital Kabul on Tuesday and opened fire on all its passengers killing 13 people, local officials said. It is the third time unknown gunmen have targeted bus passengers over the past month. The Taliban insurgent group have denied any connection to the attacks, which some have blamed on militants who have sworn allegiance to the Islamic State. However, no group has claimed the bus attacks and any connection to self-proclaimed IS commanders is unclear. On the first two occasions, members of the ethnic Hazara group were singled out and kidnapped, shaking the minority group that was persecuted during Taliban times. It was not immediately clear whether the passengers targeted on Tuesday belonged to the Hazara community, but the latest attack fueled fears of fresh sectarian violence in the country plagued by decades of war. The gunmen wore black masks over their faces, according to Wardak acting governor Abdul Majid Khogyani. "We have tasked security forces to do a proper investigation and hand over perpetrators to the judicial officials," Khogyani said. Most ethnic Hazaras in Afghanistan are Shi'ite Muslims, while the Taliban and Islamic State follow the Sunni branch of Islam. While the Taliban persecuted Hazaras during their five-year rule of Afghanistan before being toppled in a US-led military intervention, the insurgents more recently have disavowed anti-Shi'ite violence. Reports of self-proclaimed IS fighters in Afghanistan have been growing since last summer, but operational links between local fighters and the group's leadership are murky. Afghan special forces are still trying to free 31 passengers seized at the start of the March, in southeastern Zabul province. "They have inflicted casualties on the enemy and captured some of them, but unfortunately the kidnappers keep changing their position," interior minister Nur ul-Haq Ulumi told parliament on Monday. All but one of eight Hazara passengers seized late in February have been freed. - Reuters