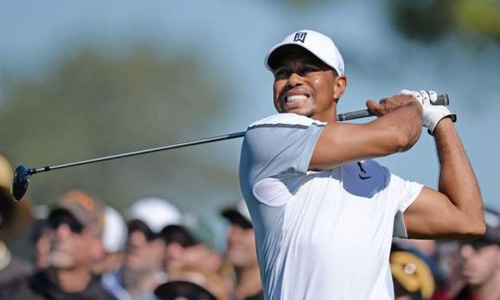 LOS ANGELES (Reuters) - As the clock counts down for the April 9-12 Masters, fans, players and medical experts continue to speculate on whether a shockingly out-of-sorts Tiger Woods will be able to compete at the year's opening major. Woods missed the Masters last year for the first time in his career after being advised by doctors to have back surgery and his participation in the 2015 edition is in serious doubt given his struggle for form and fitness this season. The former world number one, whose ranking has stunningly slipped to 70th, has competed only twice on the 2014-15 PGA Tour and said he would not return to the circuit until he felt his game was "tournament-ready". Time, however, is not on his side should the 39-year-old be contemplating a comeback ahead of the Masters at Augusta National where he is a four-times champion. Not only is his game in complete disarray, with some pundits believing that he is suffering from the chipping 'yips', but his troublesome back is still posing problems. A winner of 14 major titles, Woods struggled dismally in his first two tournaments this year. He posted the highest score of his professional career, while looking more like a struggling amateur than the greatest player of his generation, as he carded a mind-boggling 11-over-par 82 to miss the cut at the Phoenix Open last month. He was not much better three weeks ago at Torrey Pines where he was two over par after 11 holes when he decided to pull out because of tightness in his back, his third withdrawal in his last nine starts. BACK ISSUES Woods said his back issues at Torrey Pines were not related to the surgery he had last year but Duke University professor Dr. Selene Parekh felt the evidence suggested otherwise. "This is very concerning because Tiger was making it real important that it was all about his glutes at Torrey Pines," Parekh, an associate professor of surgery in the Division of Orthopaedic Surgery at Duke, told Reuters on Friday. "But that's all part of your core muscles -- your lower back and the glutes -- and so I can't believe that they are not related," said Parekh, who has not worked with Woods. "My thought is that Tiger may have some nagging pain still in the lower back which is causing him to change the way he is swinging, which is then leading to some of his quad and glute issues." Asked whether Woods would have been expected to make a full recovery from his surgery last year, Parekh replied: "Medical research shows that most golfers are able to come back about nine months after a microdiscectomy without any residual issues. "The problem for Tiger is that he is 39 and he's had a lot of wear and tear through the last three-and-a-half decades. "He has a culmination of issues going on, and then there are his psyche issues as well. He's going to have a very hard time getting back to his (previous) level of play." Mental game expert Dr. Joe Parent, who helped major winners Vijay Singh and Cristie Kerr reach the top spot in the world rankings, believes Woods is paying a steep price for becoming too technically focused on his swing. "He has become very, very mechanical. Tiger never looked like he was moving in a mechanical way when he was the master of the short game," Parent told Reuters. "He was staring that green down and he had a picture of what that ball was going to do. "But now if his mind moves to technique, there's no picture. His problems are more mental because he doesn't trust the physical, and he's said that." One man who is not prepared to write Woods off just yet is Jack Nicklaus, whose record total of 18 major victories has long been targeted by his fellow American. "Tiger is struggling ... more between his ears than he is any place else," Nicklaus told Golf Channel's Morning Drive. "I think Tiger will turn it around. He's too dedicated, he works too hard at it, he's got too much talent. He'll figure it out."