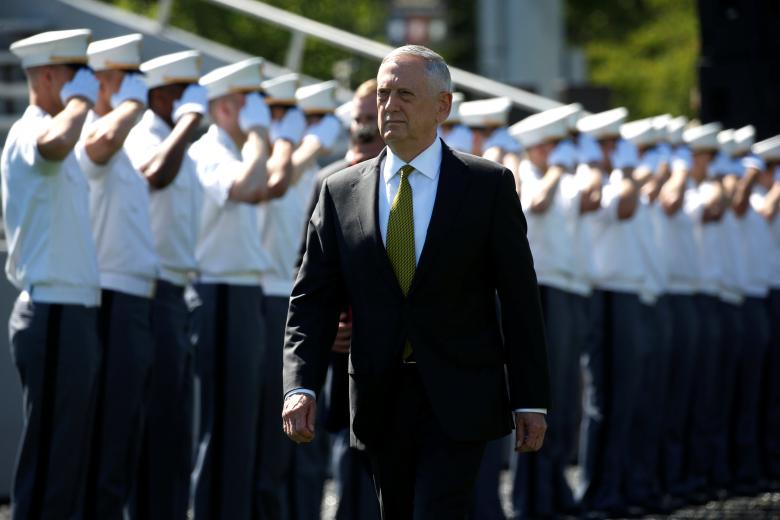 WASHINGTON - US Defense Secretary Jim Mattis is expected to press for greater cooperation to contain North Korea's nuclear and missile threat at a regional security forum in Singapore later this week, where for years Washington has sought to spotlight China's expansion in the strategic South China Sea.

President Donald Trump has actively courted Chinese support on North Korea and abandoned an Asia-Pacific trade pact soon after taking office in January. That has raised concerns among Southeast Asian allies in the lead up to the annual Shangri-la dialogue starting on Friday that Washington might allow China a freer rein elsewhere in the region.

A US Navy challenge to China's South China Sea claims last week may have allayed some of the concerns over broader American engagement. But Asian officials and diplomats are still hoping for a clearer articulation of Trump's policy when Mattis speaks in Singapore on Saturday.

Abraham Denmark, a former deputy assistant secretary of defence for East Asia, said that while Mattis' focus would have to be on North Korea, perhaps Trump's most pressing security worry, it was important for him to lay out a broader policy to ease worries.

"The region will pay very close attention ... and the goal for Secretary Mattis should be to clearly enunciate the policy of the United States towards the Asia-Pacific," he said.

US focus on North Korea has been sharpened by dozens of North Korean missile launches - the most recent of which was on Monday - and two nuclear bomb tests since the beginning of last year and by Pyongyang's vow to develop a nuclear-tipped intercontinental ballistic missile (ICBM) capable of hitting the US mainland.

US officials, speaking on condition of anonymity, said that in Singapore Mattis would likely stress the threat posed by North Korea and the importance of Asia-Pacific countries working together to counter its weapons programs as the United States negotiates with China and others to toughen sanctions on Pyongyang.

While Mattis' speech was still being worked on and could change, concerns about North Korea, one official said, would inevitably mean less emphasis on China's fortifying of artificial islands in the South China Sea. The building of islands is seen as a move by China to solidify its contested claims in the sea, one of the world's busiest shipping lanes.

US officials and diplomats say that in spite of Trump's overtures to Beijing, China still appears reluctant to agree to tougher sanctions unless North Korea escalates tensions further by conducting another nuclear test or a launch directly related to its ICBM programme.

US officials insist the administration remains committed more broadly to the region.

They note that Mattis' first international trip was to the region, visiting Seoul and Tokyo. Vice President Mike Pence and Secretary of State Rex Tillerson also travelled to Asia and the latter hosted counterparts from the Association of Southeast Asian nations (ASEAN) this month. Trump himself is due to attend regional summits in Vietnam and the Philippines in November.

The Pentagon also says it supports "in principle" a proposal by Senator John McCain, the head of the US Senate's Armed Services Committee, to increase military funding for the Asia-Pacific by $7.5 billion.

While Trump's repeated lauding of Chinese President Xi Jinping after their meeting in Florida in April raised questions among Asian allies about whether they could count on Washington as a shield against China’s assertiveness, the Pentagon sought to counter that perception last week.

China played down the significance of the US Navy's "freedom of navigation" operation last week. The Global Times, an influential tabloid published by China’s official People’s Daily newspaper, hailed Trump as a "pragmatist" following the "empty legacy" left by predecessor Barack Obama's pivot towards the region.

Asian officials say lingering worries about Trump's direction have been fuelled by his unpredictable personal approach to policymaking and his emphasis on his chemistry with Xi.

A source familiar with Japanese government thinking, speaking on condition of anonymity, said it was worrying that Trump had still not managed to appoint senior officials for Asia at the Pentagon and the State Department, a sign that it would be difficult to implement policy decisions.

An Asian diplomat said much remained uncertain and all at Shangri-la would be listening especially closely to Mattis for clues. "We want to know, will the United States remain committed to the region?” the diplomat said. -Reuters