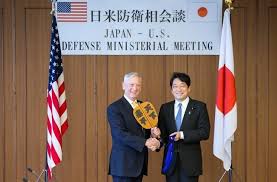 Mattis, who is on the last stop of a week-long trip to Asia, offered similar reassurances about the US alliance with South Korea during a stop in Seoul on Thursday. He assured the South Korean government of an “ironclad” commitment to its security, including keeping US troop levels there of around 28,500 soldiers. In Seoul and Toyko, he also defended Trump’s decision to halt “war games,” saying it would help diplomats negotiate. “This decision was taken to create space for our diplomats to negotiate strongly and increasing the prospects for a peaceful solution on the peninsula,” he said. “At the same time, we maintain a strong collaborative defensive stance to ensure our diplomats continue to negotiate from a position of unquestioned strength.” Japan, which hosts some 50,000 US military personnel, including the biggest overseas concentration of US Marines and a US Navy carrier strike group, relies on the Washington for its defence.