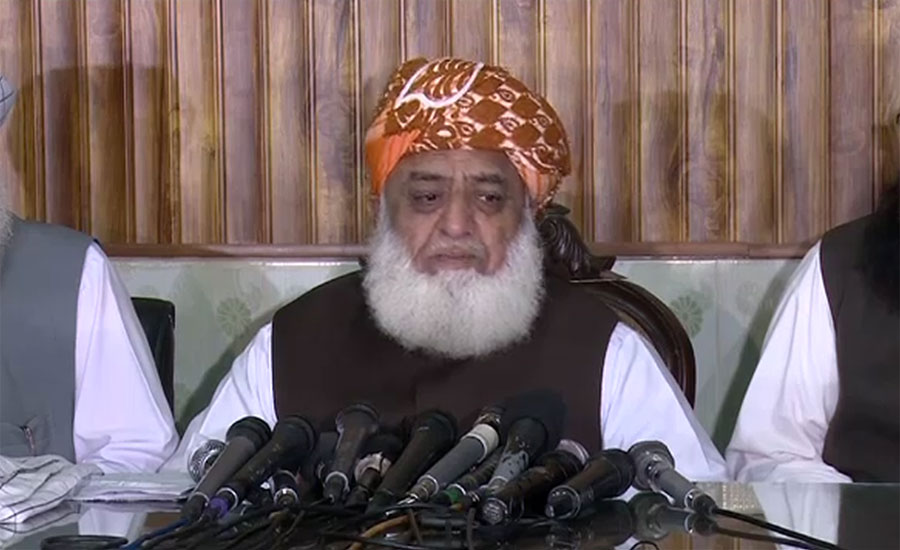 PESHAWAR (92 News) – Jamiat Ulema-e-Islam (JUI-F) chief Maulana Fazalur Rahman has said that this war will conclude at the toppling of the government. Addressing a press conference on Saturday, he demanded that elections should be conducted afresh after removing the incompetent and illegitimate government. He said that the entire country would be their battlefield. The JUI-F chief said that their first in Islamabad would be on October 27. “Later, we will give the Plan B and C. When a man enters the arena he is not afraid of arrests. Violence will increase if the JUI-F leadership was arrested and situation will go out of the control,” he declared. He said that a flood of people is coming and the rulers will be washed away like a straw. Maulana Fazalur Rahman said that they have been changing their strategy to deal with the situation. “There is no government in the country presently. We demand that the rulers should resign immediately,” he said. He said that the country is sinking economically. “The wails of common man are touching the sky. There is business inertia in the country. A wave of the change comes when the country sinks economically,” he maintained. The JUI-F chief said that they will have to move forward by becoming voice of the country and representative of the people. “The fake rulers have brought difficult time for the country by talking about the nuclear war,” he added. He claimed that PPP co-chairman Asif Zardari is with them and they are facing disappointment from nowhere. Maulana Fazalur Rahman said that the government’s seminaries card had failed. “Such government should not be backed. We do not want a clash with the institution,” he said. He said that he wants to see the participation of all opposition in the Azadi March. “We have not accepted the elections and have been protesting. We have approached the people,” he said. He said that they want re-election and it is their stance. “What sort of the speech it was that India won its case in the United Nations the next day,” he questioned.