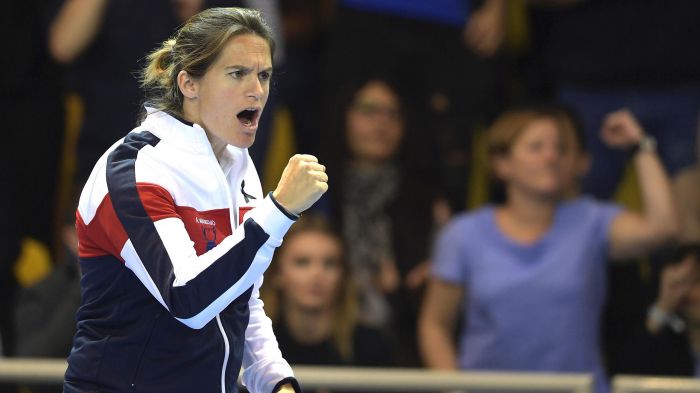 PARIS (Reuters) - Former world number one Amelie Mauresmo has turned her back on becoming France’s new Davis Cup captain, opting instead to work with French player Lucas Pouille. A statement from the French Tennis Federation on Thursday confirmed the U-turn by the 39-year-old who had been named in June to become the first woman to captain the French team. Mauresmo, who previously captained France’s Fed Cup team, was to due take over from Yannick Noah, whose third stint in charge ended in a disappointing defeat by Croatia in last month’s final held in Lille’s soccer stadium. “(Amelie Mauresmo) has accepted this challenge and renounces the position of captain of the Davis Cup France team to carry out this mission,” the statement said. “The French Tennis Federation supports and encourages this project which serves the interests of French tennis.” Pierre Cherret, the FFT’s National Technical Director, said he would begin the process of finding a new Davis Cup captain who would also be responsible for the men’s team at the 2020 Olympic Games in Tokyo. “It was important and logical for Lucas, after his fruitful collaboration with Emmanuel Planque, to look for the person most likely to continue his development,” Cherret said. “As head of the French teams, I will soon make my proposal for the new captain to the committee.”

Mauresmo had expressed disappointment at the International Tennis Federation’s (ITF) decision to revamp the Davis Cup from next year in conjunction with Spanish investment group Kosmos with whom they agreed a 25-year $3 billion deal. An ITF vote in August gave the green light to replace the current ‘home and away’ World Group format with an 18-nation finals week to be staged in Madrid next November. “I tell myself that all these young people who watched the Davis Cup on television, who have had incredible moments in the stadiums, will never be able to live this again,” Mauresmo said earlier this year after the announcement was made. Pouille, ranked 32 in the world, had also criticised the competition’s revamp after Croatia’s Marin Cilic beat him in Lille to seal the last Davis Cup final in its current guise. Pouille said afterwards he would not play in the Davis Cup again, while other members of the French team also criticised the direction in which the competition was moving. The 24-year-old said on Thursday that he was excited to work with Mauresmo, who also enjoyed a successful coaching stint with Britain’s former world number one Andy Murray. “I am very happy to start my new collaboration with @AmeMauresmo! Her experience as a player and coach can help me achieve my goals,” he wrote on Twitter. “I’m sure we’re going to do great things together.” As Davis Cup runners-up this year, France will not have to play in the February qualifying round, meaning Mauresmo would not have made her debut as captain for 12 months.