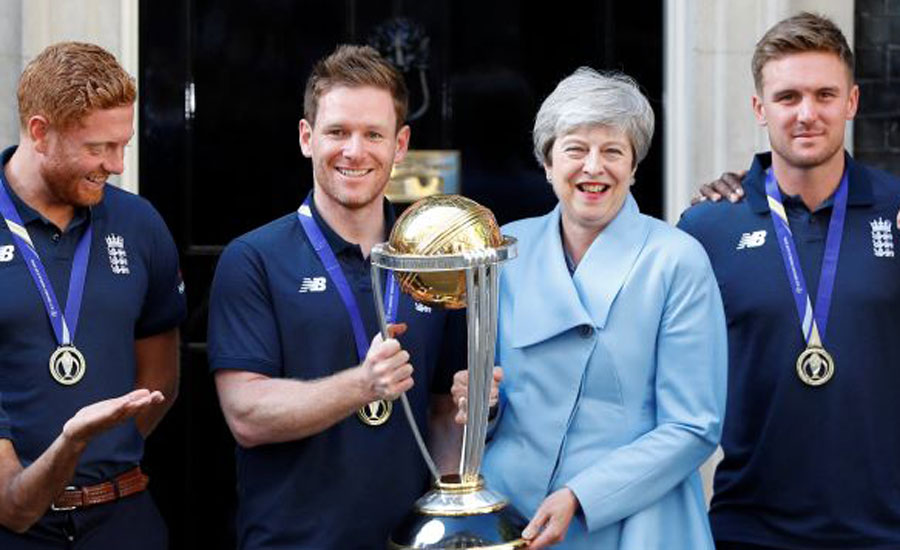 LONDON (Reuters) - British Prime Minister Theresa May hosted the World Cup-winning England cricket team in the garden of her Downing Street residence on Monday, describing their win as “one of the great sporting spectacles of our time”. England ended their 44-year wait for a first 50-overs world title by beating New Zealand in a nailbiting final Super Over on Sunday. May, a keen cricket fan, was at the match and, after the win, posted a video clip on Twitter of herself dancing. The prime minister, who is due to stand down next week, greeted the players in front of her residence and posed for pictures with the team and the trophy. “When the odds were against you in the biggest game of your lives, you simply and stubbornly refused to lose. It is that determination, that character, that has made you world champions. But, more than that, you have made history,” May told the players during the drinks reception, according to remarks released by her office. “You have helped the nation fall in love with cricket once again,” she said, adding that the match was “a final for the ages”. Since being unceremoniously dumped out of the 2015 edition of the tournament in Australia, the England side have reinvented themselves as one-day cricket specialists and had headed into the World Cup as overwhelming favourites. The match, which England won by the thinnest of margins after a tie-break Super Over, was watched by more than 8 million people in Britain.