May sets up business councils to advise on post-Brexit policy 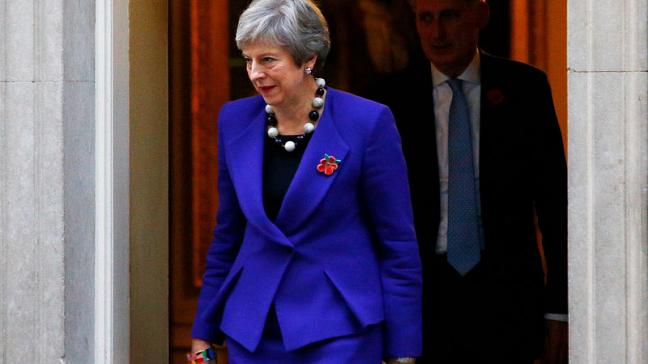 May sets up business councils to advise on post-Brexit policy

LONDON (Reuters) - Prime Minister Theresa May has created five new business councils to advise on issues facing core sectors of the economy as Britain leaves the European Union, her office said on Tuesday. With less than five months before Britain is due to quit the bloc and no exit deal yet agreed, business leaders have been demanding greater certainty over the kind of trade terms the divorce will deliver. The government said each of the councils would be chaired by two business leaders and would be made up of around 10 members. They will meet three times a year; twice with the prime minister and once with a senior minister, and provide policy recommendations. “I’ve asked these new councils to advise us on the opportunities and challenges facing business as we shape the UK for the future,” May said in a statement. The government has been stepping up its engagement with business. Last week, May and Chancellor Philip Hammond met around 150 executives to discuss their concerns about Britain’s imminent departure from the EU. May will host the co-chairs of the new business councils at her Downing Street office on Wednesday to set out their objectives and discuss cross-sector issues such as productivity and international investment, her office said. The “Financial, Professional and Education Services” council will be chaired by Prudential (PRU.L) Chairman Paul Manduca and Santander UK Chairman Shriti Vadera, while BAE Systems (BAES.L) Chairman Roger Carr and Rolls-Royce (RR.L) Chairman Ian Davis will head the “Industrial, Infrastructure and Manufacturing” council. There will also be a “Telecoms, Creative Industries, Technology and Media” council headed by BT Group (BT.L) Chairman Jan du Plessis and ITV (ITV.L) Chief Executive Carolyn McCall. The final two councils will cover “Consumer, Retail and Life Sciences”, chaired by Tesco (TSCO.L) Chief Executive Dave Lewis and GSK (GSK.L) Chief Executive Emma Walmsley, and “Small Business, Scale ups and Entrepreneurs.” Each council will also have a representative of a relevant business lobby group, the government said.