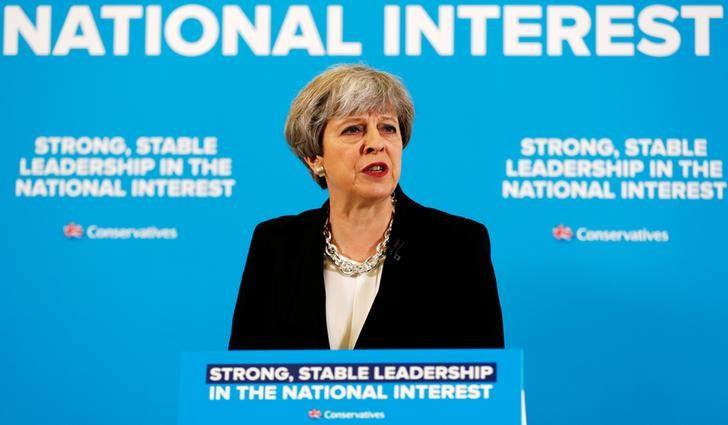 May goes into the snap June 8 election she called with opinion poll ratings that indicate she will win a landslide comparable with Margaret Thatcher's 1983 majority of 144 seats in the 650-seat parliament.

But the prime minister, an initial opponent of Brexit who won the top job in the political turmoil that followed the June 23 referendum vote, has so far given few details on what she aims to do with her power.

Her collection of pre-election pledges known as a manifesto gives a glimpse of what May plans for Britain's $2.6 trillion economy as she plots tortuous Brexit divorce negotiations with the 27 other members of the European Union.

"I am determined to cut the cost of living for ordinary working families, keep taxes low and to intervene when markets are not working as they should," May wrote in The Sun, Britain's most popular newspaper.

"The next five years will be the most challenging that Britain has faced in my lifetime," she wrote in The Telegraph newspaper. "Brexit will define us - our place in the world, our economic security and our future prosperity."

A spokesman for May's Conservative Party did not respond to requests for comment.

In a clear attempt to court the traditional supporters of other parties, such as Labour and the United Kingdom Independence Party, May will target so-called "fat cats," who rip off ordinary people, according to The Sun.

It said measures would be taken against rail bosses, landlords and lawyers, without providing details.

May last year praised free markets and free trade in a speech to party activists, but also said that she would be prepared to intervene where markets were deemed dysfunctional or where companies were exploiting the failures of the market.

If she wins on June 8, May will have one of the toughest jobs of any recent British prime minister: holding the United Kingdom and its economy together while conducting arduous divorce talks with EU leaders on the intricacies of finance, trade, security and immigration.

May has cast the Brexit vote as a "quiet revolution" that exposed the failings of modern Britain in a way that can no longer be ignored by a leader who looks back to Thatcher, Winston Churchill and Clement Attlee for inspiration.

She has promised fundamental - though yet to be detailed - reforms to fix problems ranging from arrogant elites and venal bosses to workers' rights, immigration and Britain's obsession with class privilege.

Despite predictions economic turmoil, Britain's economy surprised almost all forecasters and grew by 1.8 percent last year, faster than all other Group of Seven economies in 2016 bar Germany.

But there are signs that Brexit could already be biting the economy, such as quickening inflation. May and her finance minister, Philip Hammond, are keen to gain some flexibility.

May will commit to erasing the country's budget deficit by the middle of the next decade, allowing for greater borrowing to support the economy in the run-up to Brexit, the Telegraph newspaper reported.

Hammond has previously said he would aim to put public finances back in the black as soon as possible after 2020.

Under the government's existing plans, the deficit is projected to fall to 0.7 percent of gross domestic product by the 2021-22 financial year, down from 2.6 percent of GDP in the last financial year.

May will also keep the government's pledge to cut corporation tax to 17 percent by 2020, the Telegraph said.

But May will also commit to removing winter fuel payments from the wealthy and to charge more people who currently receive free care in their own home.

May will end universal free school lunches for infants to fund an extra 1 billion pounds per year for education, the newspaper said.

The Conservatives will ditch a so-called tax "triple-lock" that guaranteed no rises in income tax, national insurance or value-added tax, but will make a commitment to lower taxes.

On immigration, May will stand by a pledge to bring it down to the tens of thousands, but will provide no deadline. The BBC said the manifesto will propose extra charges for businesses who employ non-EU migrants and higher charges for migrants who use the National Health Service. -Reuters