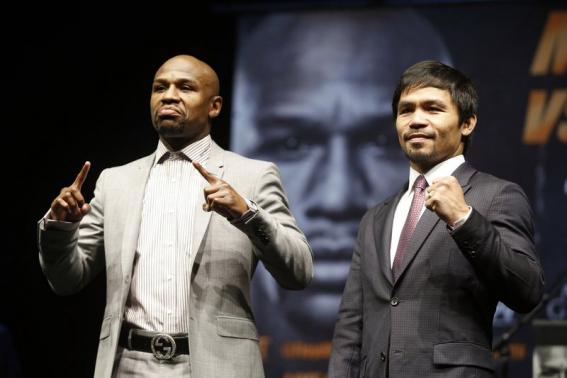 LOS ANGELES - After five years of bickering, posturing, and false alarms, Floyd Mayweather Jr. and Manny Pacquiao stood face-to-face on Wednesday to mark the official countdown to one of boxing's most anticipated fights. Pacquiao, wearing a dark suit and tie, arrived on stage for the news conference as AC/DC's "Thunderstruck" blared through the speakers. He was followed by Mayweather, who was in a light suit with no tie and walked in to Queen's "We Will Rock You." The two men then stood face-to-face and side-to-side, as a roar of camera shutters tracked their every move, before sitting with their respective camps in the only news conference they will hold to hype their May 2 fight. And while neither boxer took questions from the media packed inside the Nokia Theater in downtown Los Angeles, each exuded confidence. "This is a fight that the world can't miss," Mayweather said from his podium. "I'm in the gym working right now, ... pushing myself to the limit because I never wanted to win a fight so bad in my life." The fight at the MGM Grand Garden Arena in Las Vegas between Mayweather and Filipino southpaw Pacquiao is expected to be the highest grossing bout in history. "This is what you are waiting for since five years ago," said Pacquiao, who has held world titles in eight different weight divisions. "The fight is on and we're very excited ... we will do our best on May 2 to make you happy." Pacquiao told a group of reporters that he was not worried about the upcoming bout and was more concerned about prior fights with Oscar De La Hoya, Antonio Margarito, Miguel Cotto. Those fights came when Pacquiao, 36, was closer to his prime. Mayweather, 38, is also closing in on the end of his career and Pacquiao's camp feel that works to their advantage. "(Mayweather) had a better chance of winning five years ago," said Pacquiao's trainer, Freddie Roach. "He has slowed down. I think Manny knows how to beat him." There are no shortage of contentious storylines in this matchup. Roach has exchanged words with Mayweather's father and trainer, Floyd Mayweather Sr., while fight promoter Bob Arum used to work with Mayweather instead of Pacquiao before a falling out split the pair. "For me to be in the biggest fight in boxing history ... I kept my fingers crossed and here we are today," said Mayweather. - Reuters