McCullum gets World Cup boost with Sportsman of Year award 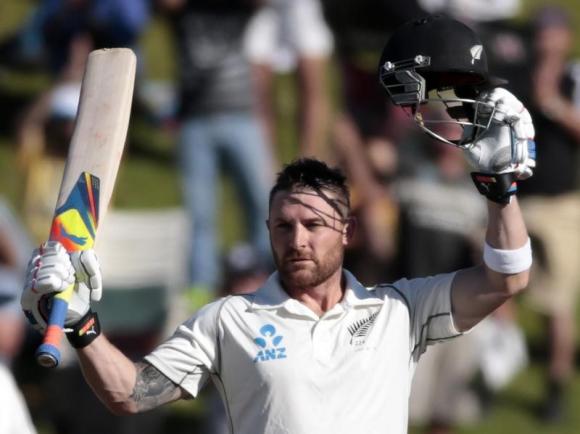 McCullum gets World Cup boost with Sportsman of Year award

(Reuters) - New Zealand cricket captain Brendon McCullum hoped his winning the country's Sportsman of the Year award on Wednesday would give his team mates a massive boost heading into their World Cup opener on Saturday. The 33-year-old McCullum won the Sportsman of the Year and was a finalist for the supreme prize, the Halberg Award, but was beaten by Olympic and world rowing champions Hamish Bond and Eric Murray, who had also won the Sports Team of the Year on Wednesday. "It's really humbling but when you play a team sport individual accolades aren't what you play for," McCullum told reporters in Christchurch on Thursday, hours before the opening ceremony for the World Cup. "But at the same time I'm respectful of the whole awards and all those other recipients of awards "This one is very much for the boys as well." McCullum was the first cricketer to win New Zealand's Sportsman of the Year award since former captain Martin Crowe in 1991. He was recognised for a superb 2014 when he became the first New Zealand player to score more than 1,000 test runs in a calendar year and also notched the country's first test triple century. The 302 he scored against India at the Basin Reserve last February was also voted by the public as New Zealand's Sports Moment of the Year and he said the awards would only help his side before they face Sri Lanka at Hagley Oval on Saturday. "For cricket to be in that spotlight is a good thing and right on the eve of the World Cup can only help the momentum the team's built up," he added of their series victories over Sri Lanka and Pakistan and against South Africa in their final warmup clash on Wednesday. "It was a really good performance, especially against a strong South African team. "After them coming over here (in October) and dealing to us - I know it's a warmup game and it's hard to replicate the intensity of a fully fledged international but for us I was really happy with the attitude we took into the game. "We ticked the boxes with bat, ball and, more importantly, in the field which is a driver of our attitude. "We maintained a really strong presence and intensity and all the guys were engaged. That's a good sign. We go in with no excuses; we've had a great preparation and we're ready to go."