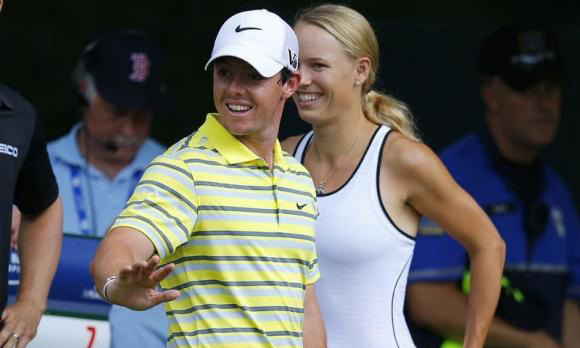 LONDON - Former world number one Caroline Wozniacki says she felt like someone close to her had died after the split from golfer Rory McIlroy last year. The Dane was quoted by Britain's Independent newspaper as saying her world was turned upside down when the Northern Irishman ended their relationship in May after wedding invitations had been sent out. "In my head I had everything until that moment," said Wozniacki. "I had a great career, I was getting married, I have a perfect family. There was really nothing going against me. I was happy, very happy. "Then all of a sudden something happens you don’t expect. You see your world turned around, literally from one second to the next. I didn't know how strong I was until that happened and I didn't know how much you can actually take. It really feels like someone close to you has died. "That taught me so much. I grew up so much in that short amount of time. I also realized who is always there for me and who is just there when things are good. "You learn about life. You have to enjoy it while it's there. You have to enjoy all the great moments. I think now when I look back I wouldn't have been without it because now I really know I'm strong, I know what I want, I know what I can accept, what I can't accept." Their careers initially went in different directions after the split with McIlroy, who is now the world's number one golfer, winning the BMW PGA Championship at Wentworth as Wozniacki suffered an embarrassing first-round exit at the French Open. "When I walked into the stadium or on to the court everybody was staring at me," said the Dane. "I felt the pity. I was like: ‘I’m OK. I’m fine. Don’t give me your pity. Don’t come up to me and stroke me. I’m not a child. I’m going to be fine'. "I was trying in the match but I wasn't there. I have to be happy to play. I have to be excited. At the time it was like a funeral for me." Wozniacki has since returned to form, reaching her first grand slam final since 2009 at the U.S. Open in September and going back up to number five in the world. - REUTERS