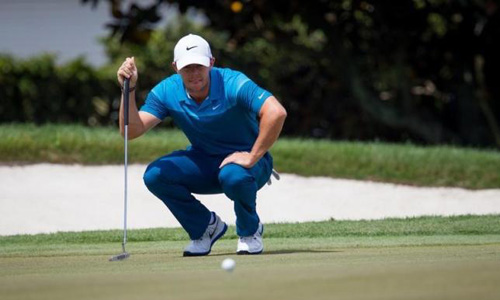 FLORIDA - The prospect of a career grand slam for world number one Rory McIlroy and uncertainty over the state of Tiger Woods' game have dominated the build-up to this week's Masters at Augusta National. Northern Irishman McIlroy will be bidding for his third consecutive victory in a major, and his first Green Jacket at the picturesque 'Cathedral of Pines' in Georgia, to complete a full set of all four of golf's blue riband events. "I've got a chance to go to Augusta and do something very few players in this game have done before so that adds a little bit of spice to it," said McIlroy. Four-times champion Woods, meanwhile, only decided on Friday to compete at Augusta National, having struggled badly in his two tournament starts this season. "It's obviously very important to me and I want to be there," said Woods, who missed last year's Masters after being advised by doctors to have a microdiscectomy to repair a pinched nerve in his back. "I've worked a lot on my game and I'm looking forward to competing." He posted the highest score of his professional career, an 11-over-par 82, to miss the cut at the Phoenix Open in January, and withdrew from the Farmers Insurance Open at Torrey Pines the following week after 11 holes because of tightness in his back. The former world number one, who claimed the most recent of his 14 major titles at the 2008 U.S. Open, said he would not return to the PGA Tour until his game was "tournament-ready" and many pundits believe he is suffering from the chipping 'yips'. If Woods does indeed have the yips, an involuntary movement of the muscles, Augusta National will provide him with a daunting challenge given its slick, heavily contoured greens. McIlroy tied for eighth at last year's Masters to record his first top-10 in six appearances at the season's opening major. Four years ago, he squandered a four-shot lead heading into the final round as he closed with a nightmarish 80, but he immediately rebounded from that meltdown with his first major victory at the U.S. Open two months later. EXTRAORDINARY DEPTH McIlroy has since added two PGA Championship crowns (in 2012 and 2014) and the British Open (2014), leaving him poised to become the seventh career grand slam winner following Woods, Jack Nicklaus, Gary Player, Ben Hogan, Bobby Jones and Gene Sarazen. Though McIlroy is the pre-tournament favorite at the Masters, the possibilities are seemingly endless when it comes to likely winners. The last eight editions have produced seven different champions and golf's extraordinary depth of talent has been showcased on the 2014-15 PGA Tour where there have been 19 different winners from the 20 tournaments so far completed. The only 'repeat' Masters winner over the past eight years is reigning champion Bubba Watson, who earned his first Green Jacket in 2012. "To win it three times would be remarkable," the American left-hander said of his bid to join the likes of Sam Snead, Gary Player and Phil Mickelson by becoming the sixth triple champion at Augusta. "I never thought I would win it twice, so I can't believe that we are talking about it ... three times. Pretty wild and pretty crazy stuff." Short game wizardry and the ability to minimize three-putts are musts for any would-be Masters champion at an iconic venue renowned for its lightning-fast, severely contoured greens. The list of potential champions for this year's tournament is a long one, as demonstrated by the 'unlikely' Masters victories of Canada's Mike Weir in 2003, American Zach Johnson in 2007 and South African Trevor Immelman in 2008. Among the top contenders this year are 2013 champion Adam Scott and fellow Australian Jason Day, American Jimmy Walker, a double winner on the 2014-15 PGA Tour, and compatriot Jordan Spieth, a runner-up at Augusta last year. Other likely candidates include long-hitting American Dustin Johnson, his compatriot Mickelson, consistent Swede Henrik Stenson, 2013 U.S. Open champion Justin Rose of England and rising Japanese talent Hideki Matsuyama. - REUTERS