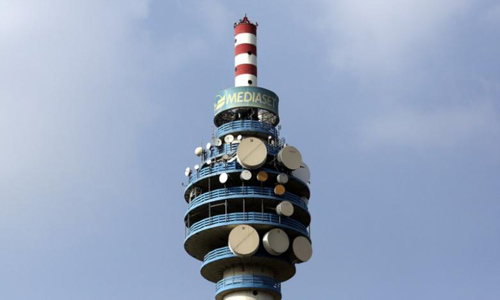 MILAN- Italian broadcaster Mediaset (MS.MI) and rival Sky (SKYB.L) are in contact over a possible deal concerning Mediaset's pay-TV arm after an agreement to sell the unit to Vivendi (VIV.PA) collapsed, two sources close to the matter said on Friday.
France's Vivendi abandoned in July its 800 million euro ($847 million) deal to buy loss-making Mediaset Premium, throwing the unit into crisis months before its rights to air Italian and Champions League football, its main drawcard, will be back on the market. Mediaset and Sky's Italian subsidiary have denied being in formal talks over Premium. No such negotiations can begin until Mediaset and France's Vivendi resolve a legal dispute over their soured deal, said a third source familiar with the situation. If Mediaset Premium cannot salvage its deal with Vivendi quickly, it may need to find another partner. Alone, it would struggle to bid again for the rights to air Champions League and Italy's top-flight Serie A matches. The rights to both expire in 2018. They are due to go up for auction again in the first half of next year. "There has been contact to understand what to do beyond 2018," one source said, declining to elaborate. Sky has denied interest in buying Mediaset Premium, though there has been persistent media speculation that it could step in if the Vivendi deal is finally scrapped. There are also signs Sky and Mediaset are drawing closer. On Tuesday, Mediaset's production unit, Medusa, sold exclusive rights to Sky Italia for its upcoming movie season. Mediaset, controlled by former Italian Prime Minister Silvio Berlusconi, is suing Vivendi for damages and is asking Milan judges to enforce the pay-TV contract signed in April. The case is expected to start in March. On Friday, Mediaset said it had dropped an additional request for a court to order the seizure of a 3.5 percent stake in Vivendi. This gives the two sides more time to possibly reach an out-of-court settlement, according to one source. There is a possibility that Vivendi could make a revised offer for Mediaset Premium, but it has little chance of succeeding, this source said, adding Mediaset would not accept anything less than a full acquisition offer. Vivendi declined to comment. -Reuters