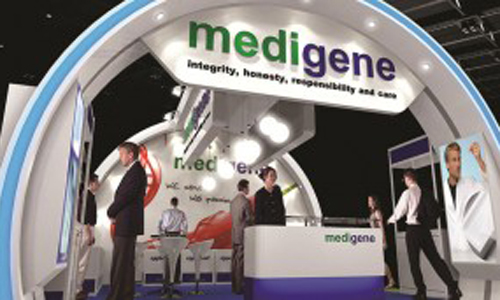 FRANKFURT - German biotech firm Medigene said it is drawing more interest from prospective alliance partners for its technology to boost the immune response to cancer after its deal with U.S. peer Bluebird Bio.
Medigene on Sept. 29 agreed an alliance with Bluebird centered on its T cell receptor (TCR) technology, boosting its share price by more than 16 percent on the day. That has helped it to re-enter Germany's technology index TECDAX, effective on Monday. The method is based on modifying T cells, one of the immune system's main weapons, to target specific tumor cells, but Medigene expects a market launch to be at least four and a half years away. "Many firms that we had tried to contact before the deal are now reaching out to us. There is a palpable increase in interest," Medigene's Chief Operating Officer Dave Lemus told Reuters in an interview published on Monday, adding that the company now hopes to sign another alliance. Bluebird is best known for its progress in a class of customized cancer drugs known as chimeric antigen receptor T-cells, or CAR-Ts. Other biotech firms working on T cell receptor (TCR) technologies include Kite Pharma or Emergent Technologies Inc. -Reuters