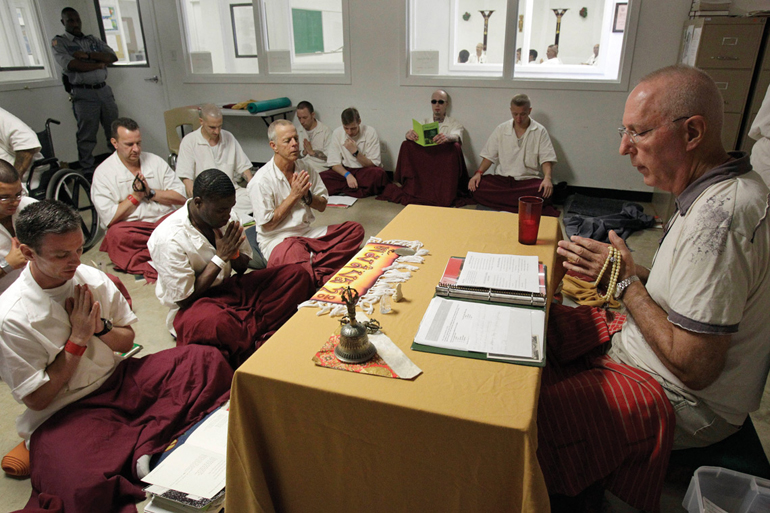 WORCESTER - Prisoners who practice transcendental meditation twice a day may experience less stress and fewer mental health issues than fellow inmates who don’t meditate, a small US study suggests. Previous research has linked this type of meditation involving mantras and mindfulness to reduced stress in a variety of populations at risk for mental health problems, including trauma victims, refugees and military veterans. For the current study, researchers offered 90 male inmates in Oregon state prisons a five-session training program in meditation then asked them to practice the techniques they learned twice daily for 20 minutes. Researchers also followed a control group of 91 inmates who didn’t receive any intervention. After four months, all the men showed some improvement in symptoms, but men in the meditation group reported significantly larger reductions in perceived stress, anxiety, depression, dissociation and sleep disturbances than the inmates who didn’t participate in this program, the study found. For depression and sleep problems, symptom scores were reduced by half, on average, among men who meditated, as was their total trauma score. “This is the first randomized controlled study to confirm that transcendental meditation can substantially decrease trauma symptoms, including reducing depression and sleep problems, in prison inmates,” said lead study author Sanford Nidich, director of the Center for Social and Emotional Health at Maharishi University of Management in Fairfield, Iowa. The practice may have benefits for both mental and physical health, Nidich added by email. “Elevated trauma symptoms are associated with poor lifestyle decision making and higher rates of recidivism,” Nidich said. “Experience of trauma exposure also is associated with adverse mental and physical health conditions, including cardiovascular disease, metabolic disease, autoimmune disorders, and cancer.” Researchers evaluated the transcendental meditation program at the Oregon State Correctional Institution, a medium-security prison, and the Oregon State Penitentiary, a maximum-security facility. Men participating in the study were 29 years old on average. Approximately 52 percent were white, 16 percent were black and 15 percent were Native American. In the treatment group, men were encouraged to meditate each morning and afternoon after completing the training program. They could also attend optional group sessions several times a week. Before treatment started, and again four months later, researchers asked participants in the meditation group and the control group to rate how often they felt stress as well as a range of symptoms associated with trauma such as sleep disturbances, depression and anxiety. While both groups experienced declines in perceived stress, men in the meditation group reported a bigger average decrease, researchers report in The Permanente Journal, online October 7th. One limitation of the study is that it isn’t designed to show transcendental meditation works better than alternative treatments, only that it’s better than doing nothing to help prisoners cope with stress, the authors note. “This is quite a significant weakness of the study,” said Bei-Hung Chang, a researcher at the University of Massachusetts Medical School in Worcester who wasn’t involved in the study. That said, the results suggest it’s feasible to try the approach in prisons and get inmates to participate, Chang added by email. “Meditation is a lifelong practice and regular practice is the key to maintain and deepen the effects,” Chang said. “As such anyone who has learned the technique should continue the practice if they want to maintain the effects and continue to improve.” Because the study only followed inmates for four months, it’s unclear how many sessions a week, over how long a period of time, would be needed to cement an effective meditation practice, noted Dr. James Stahl, a researcher at Dartmouth-Hitchcock Medical Center in New Hampshire who wasn’t involved in the study. But there may be no harm in trying, Stahl added by email. “I think it is safe to say for those amenable to transcendental meditation that it is a safe, effective, inexpensive intervention that can have long term beneficial effects,” Stahl said. -Reuters